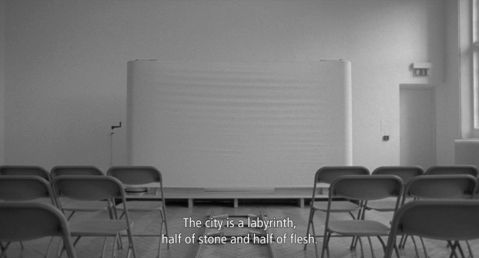 Animate Projects is proud to announce the online premiere of Travelogue, a beautiful and haunting new film by Finnish artist Jani Ruscica. Shot on 16mm, the eight-minute film was shot on location at Camden Arts Centre. A moving panorama unravels, but its blank white screen reveals nothing, and subtitled texts from a variety of historical and contemporary sources allude to London – a city only glimpsed from the window as the camera pans the rows of empty seats, for an audience that has not arrived.Travelogue is co-commissioned by Animate Projects and Camden Arts Centre, with support from Arts Council England, the Finnish Institute in London and FRAME. The film was presented at Camden Arts Centre from 31 March-4 April 2010.

Nisha Duggal is an artist based in London.