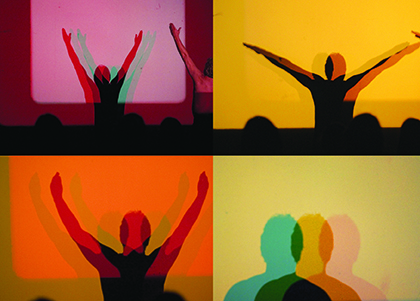 Celebrating the innovative and ground-breaking work of Plymouth-born Malcolm Le Grice, this exhibition looks at how he pioneered the ‘British Expanded Cinema’ movement with multi projection and performance works, as well as making the UK’s first computer art films. These breakthroughs can be traced in his early paintings incorporating flashing light bulbs and more recently in his 3D video installations.

Le Grice was the driving force in expanding the London Filmmakers Co-op’s to include film production, which has had a profound impact on British visual culture since the late 1960s.

He has exhibited across the UK, Europe and New York including at Tate Modern and Tate Britain, the Centre George Pompidou and Louvre, the Museum of Modern Art, MACBA in Barcelona and MUMOK in Vienna. He is represented in national archive collections across Europe and Australia, with over 80 works in the British Film Institute. His films are distributed by Lux.

Present Moments and Passing Time is a dual site exhibition at Peninsula Arts and Plymouth Arts Centre, delivered in partnership with the History Centre and Plymouth City Council (Arts and Heritage)