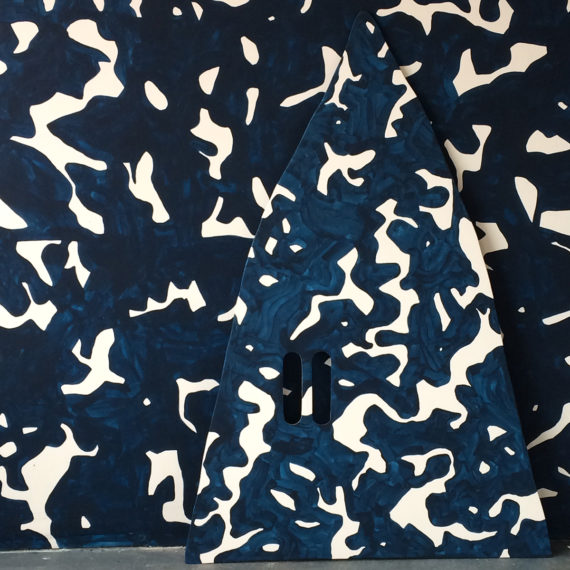 The collaborative exhibition, Razzle Dazzle takes as its starting point Dazzle Camouflage, credited to artist Norman Wilkinson where, ‘military vessels were painted with strong geometric patterns and bold contrasting colouration so as to misinform U-boat captains bent on attack. The intention was optical deception: to mislead the eye and manipulate visual perception.’ (Gil McElroy, The Uses of Abstraction)

Artists Craig Fisher, Louisa Chambers and Rob Flint each employ pattern within their practice as a form of pictorial disruption, interruption and spatial collapse. Initially to start the dialogue each artist will work site-specifically by making work directly on the gallery walls. Over the duration of the exhibition each artist will develop work by responding to the space and each other; artworks will butt up against each other, they may be shown on top of each other making individual practices both indistinguishable and jarring. As the space begins to evolve, as well as adding, interjections will be made where artworks will be removed or displaced. The artists are interested in further crossovers, which will be made during a marked time frame, the possibilities of pattern disruptions and figure/ground painting relationships within the gallery space.

Works in the exhibition will be concealed within the overall dazzle effect of the installation producing interesting juxtapositions and correlations.

The exhibition follows on from a public residency at the Harley Gallery in the East Midlands.