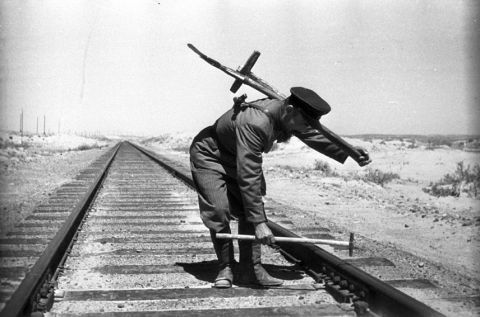 Castlefield Gallery is delighted to present Anarcadia, a body of work by artist Ruth Maclennan set in the vast steppe of south-eastern Kazakhstan. A new publication, also entitled Anarcadia, will be launched at the exhibition opening on 29 July 2011.Landscape and the traces of past actions that lie within it are the focus of Anarcadia. The video work, shot among the desert expanses of Kazakhstan, features two iconic characters: an archaeologist and a prospector; each of them methodically journeying across apparently empty but symbolically charged terrain. Both protagonists project onto the desert their desires and experiences, seeking to uncover its buried meanings and future possibilities.A new publication launching alongside the exhibition, also titled Anarcadia, is designed by Secondary Modern. It features an introduction by Steven Bode, an essay by Lucy Reynolds and an interview between Ruth Maclennan and Owen Hatherley. The book also includes transcripts of Anarcadia and an earlier film work, Capital, shot on location in Kazakhstan’s main metropolis, Astana. Reflecting Maclennan’s fascination with the country, the book features video stills and location photos from each shoot and highlights her flair with imagery and her feeling for language.Exhibition preview and book launch: Friday 29 July, 6-8pm – All welcome. ﻿