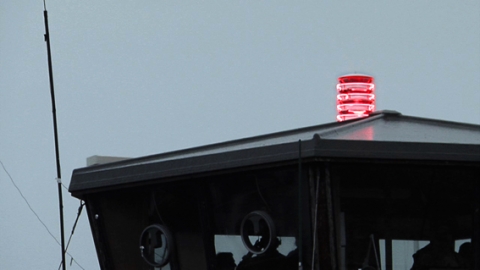 Balnakiel is a single-channel video and three-dimensional sound installation, set in the village (and former early warning radar base) of Balnakiel in the far North West of Scotland, where the artist grew up.The film work at the centre of the exhibition offers a vivid portrait of this remarkable location at the furthermost edge of Britain, in which the extremes and vicissitudes of weather are echoed by the intermittent thunder of RAF andRoyal Navy manoeuvres around this still-active bombing range. Balnakiel is not only a study of this brooding, melancholy landscape but also reveals the lives and recollections of successive residents of Balnakiel and the nearby, older clearance village of Durness (with its own violent legacy dating from the time of the Highland Clearances).The work considers the complex interaction between individual and collective memory, informed though a series of exchanges with cognitive psychologist Martin A. Conway. Celebrating the resilience of these isolated communities (while noting the slow and progressive history of depopulation that haunts this landscape), Balnakiel gives voice to contrasting perceptions and constructions of the past. Balnakiel is commissioned by Film and Video Umbrella in association with John Hansard Gallery and Wolverhampton Art Gallery. Funded by Arts Council England and an Arts Award from the Wellcome Trust.