One of the oldest ruined castle sites in France provides the venue for Temporal Traces, Magical Manuscripts, a unique international exhibition of prints, tracings, photography, film, spoken word and poetry which explores how images and words are lost, found and reconfigured across time.

It is replete with history and magic, and follows an elegantly traced timeline spanning two millennia. The artwork comprises a rich mix of visual and sound-based works which include tracings of original ancient Coptic and Greek papyri made by The Coptic Magical Papyri (a research project based at the University of Wurzburg) and Raquel Martín Hernández, alongside original copper etchings made in the mid-twentieth century by Serge Arnoux, inspired by William Blake’s Proverbs of Hell, and re-printed by Robert Campbell Henderson in 2019. These prints and tracings occupy the first two floors of L’atelier Melusine, alongside an antique colour catalogue of plates by William Blake, in an eerie dialogue which demonstrates the similarity of the images despite the enormous temporal breach between their creation dates. Henderson also presents ‘Blash o God’ a film and sound-based work produced in collaboration with celebrated Scottish poet Hugh McMillan. This installation of films, giant prints and poetry/sound pieces occupies the large attic space, a direct reference to the loving, 65 year concealment of the prophetess Elspeth Buchan’s body, hidden in a Scottish attic by Andrew Innes, her most devoted follower.

An original animation, with a breathtaking, percussive soundtrack of the ancient Greek Hymn to Typhon and Oxyrhynchus Hymn, recorded specifically for the piece by the Spanish singer Luis Calero has been created by the Coptic Magical Papyri team, and will be shown in the twelfth century ‘ground floor crypt’ space of L’atelier Melusine.

The effect is utterly extraordinary, as the variety of media, its fascinating historical content and trails form an intricate, meticulous reinvention of works which were once lost, then re-discovered and re- made, now re-envisaged as a wispy, magical narrative. 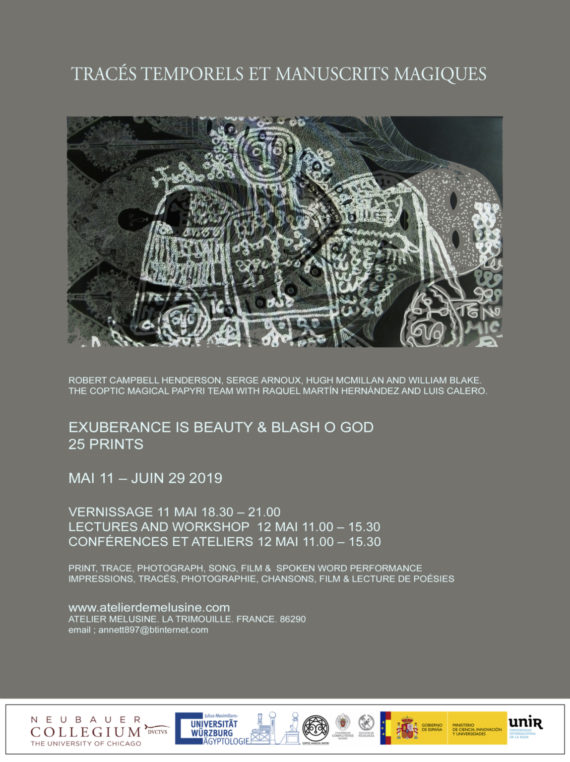