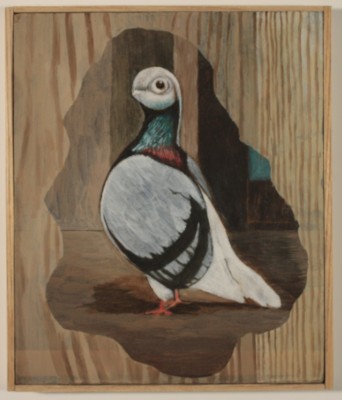 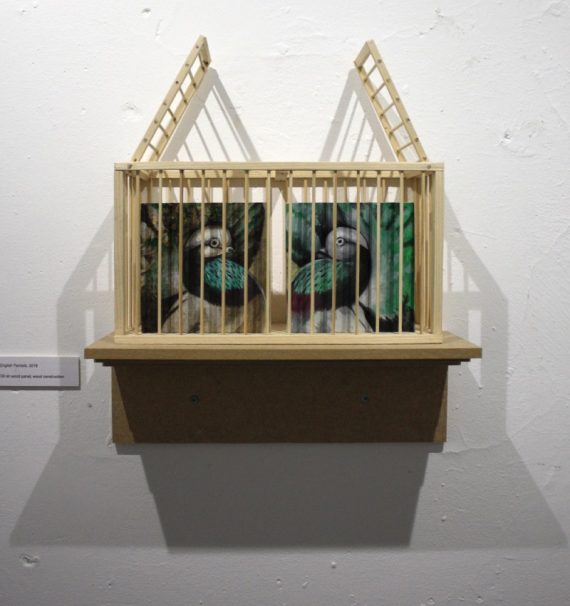 For this exhibition the gallery is imagined as an aviary, holding birds released there by the artist. When left to their own devices these birds behave in different ways, some congregate in small groups, some are more solitary, while others freely fly around. Upon entering the gallery the viewer has the capacity to grasp each bird in turn, before releasing it.

The impetus for transforming the gallery into an aviary comes from a work by the Greek philosopher Plato: The Theaetetus. In this text Plato likens our memory to a container in which we store experiences, represented as birds, that we have captured and placed there. When released into this enclosure these experiences are forgotten; it is only when we enter the aviary, and catch hold of a bird, that the past experience it represents is recalled.

The aviary Plato creates is in the form of a simile, an image which directs our understanding beyond what it depicts. The exhibition extends the scope of this simile, by making it concrete within the gallery. Like Plato’s aviary, the gallery is understood as a container, which holds birds, specifically pigeons*. They will be present as paintings Hampson has made, depicting pigeons in a variety of circumstances; some appear as caged, some in lofts and some in the sky. These works are, in part, based upon lithographic prints contained in Fulton’s Book of Pigeons, a highly regarded volume from 1880 which attempts to document all the varieties of domestic pigeons then known to be extant. A copy of this publication will be displayed in the gallery. Pigeons will also be sonically present in the form of a recording of Olivier Messiaen’s 1929 prelude for piano: La Colombe (The Dove), a work in part based on Messiaen’s transcription of the songs of actual birds.

Working together as a complex, intricate unison of forms, the three central components of this exhibition extend the aviary simile into the uncertain territory of the Uncanny. Hampson’s paintings place birds at the border of their real and imagined habitats of dovecote and painting. While Fulton’s book illustrates a project of scientific classification, undercut by the ever more eccentric varieties (in terms of name and image) displayed there, Messiaen, who described La Colombe as “orange, veined with violet,” shifts attention towards a synaesthetic reading of his own work, substantially reframing one thing as another, sound as colour, the aural reconfigured as visual. In the end it is the viewer who must, in a consciously-engaged act of looking and listening, hold this exhibition to its double promise of presence and absence, to its vivid dialectic of containment and release.

Times: by appointment, please email to arrange your visit

Click here for more information including images of all the artworks

*Plato uses the word peristereon, which is usually translated as aviary but literally means ‘pigeon house’ or ‘dovecote’.