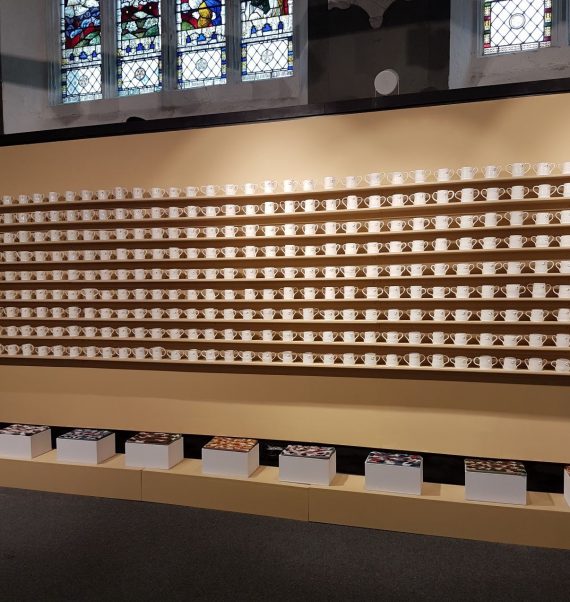 The Last Full Measure of Devotion

Kate Wilson’s installation reflecting on the conflict in Afghanistan.

Kate Wilson is a studio ceramist and academic whose practice examines emotional engagement. Playing on an already established material knowledge of the viewer, Kate questions concepts of value and attachment to the inanimate ceramic object. The Last Full Measure of Devotion has been exhibited at various venues across the country, and was the culmination of Kate’s PhD.

For centuries the ceramic vessel has been used for commemoration, marking life’s rites of passage as well as significant historic events. In the process the twin-handled loving cup has become synonymous with such occasions, its physical form an expression of communal activity and shared experience.
A collection of drinking vessels owned by The Shepton Cider Mill, consisting of predominantly factory-made objects, produced during the last 200 years or so, was the starting point for a piece of doctoral research considering emotional attachment to the seemingly banal ceramic mug. These mundane objects are not so far removed from the contents of contemporary kitchen cupboards containing mugs of various shapes, sizes and surface decoration.

Among the 400 or so objects contained in The Shepton Collection are a handful of commemorative mugs, three of which reference war in one way or another; the death of Lord Roberts, one of the most highly acclaimed soldiers of the 19th century; Lord Kitchener, who was famously used for the poster ‘Your Country Needs You’, encouraging young men to sign up during the First World War, and a small mug celebrating peace post WW1 and the forming of The League of Nations.

The Last Full Measure of Devotion developed as a response to these three humble mugs in an attempt to acknowledge and quantify the ultimate price paid by the significant number of men and women in our armed forces who lost their lives in active service during the conflict in Afghanistan since 2001. Each mug is individually thrown from 300 grams of porcelain (around the average weight of the human heart) and numbered chronologically and arranged sequentially. The age of each of the fallen is indicated alongside a tiny decal of the service medal ribbon.

The Cost is a poem written by a WW2 veteran and has been stitched into kneeling cushions contained in wooden boxes – a metaphorical invitation to quietly consider each individual and their ultimate sacrifice. The poignant verse reminds us that we also have responsibility to those who return home from such conflicts.

The installation was originally produced for the Lady Chapel in Wells Cathedral, where it was exhibited in 2013 and subsequently at Durham Art Gallery, the Cooper Gallery in Barnsley and the REME museum in 2014. Each venue offered new challenges and different perspectives on the work, as does the Salisbury Arts Centre where it is displayed for the first time on shelves.

As an artist it was important for me to respond equally to each and every person who had lost their life – all the vessels are individual and approximations of ‘perfection’ as we all are. The challenge was complacency; as my hands became increasingly more familiar with the material and process, it was harder not to switch off from the task at hand, as it was with the daily news at the height of the conflict. At each stage of the making my hands were ‘present’, from throwing, pulling handles, applying the sprig, to the glazing and the application of decals.
Each cushion is hand-stitched. Thank you to Mornette Mattick-Pike for her contribution to the cross stitching.