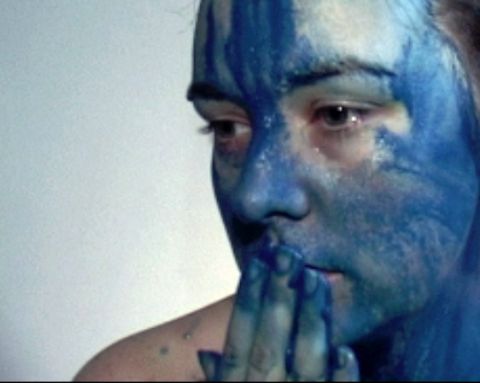 Mission Gallery presents a selection of new artworks produced during a partnership residency between Mission Gallery and Gower College. The title ‘A Blue Process’ is taken from the central piece, a new short film performed, filmed and edited by Erin Rickard.

Ritual is at the core of her recent artworks, exploring the rite of passage, and the transitional moments we encounter when passing from one status to another. These moments suspended in time offer no resolution; instead they provoke consideration and the importance of a journey. Symbolism is deeply rooted within our human desire and need to understand life, for this reason it plays an important role withinErin’s practice.

Erin Rickard is a visual artist from north Devon who ventured across the Bristol Channel to live and work in South Wales. Alongside her artist practice she has worked as a coordinator, filmmaker, curator and in 2013 founded IlfraExpo, a multi-disciplinary arts festival based in southwest England. Throughout March 2014 Erin will be Artist in Residence at Pentagoon Academies in Belgium further exploring the concepts present within ‘the […] space | A Blue Process’.