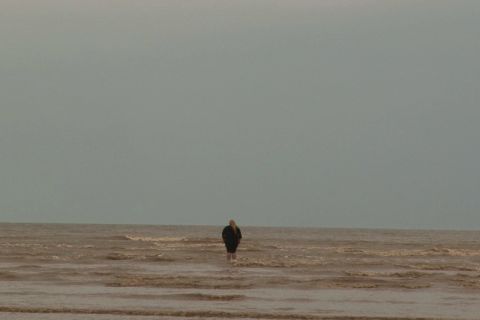 With its continuous body of salt water covering most of the earth’s surface, the sea is seen as a geophysical body with the tidal rhythms acting as its lungs. The sea is a constant reminder of life, where its continuous tidal motions breathe existence into nature’s habitat and fuel the cycle of regeneration. But what if that were to stop? Within the piece you see a melancholic, motionless figure, dressed in black, with her back to the viewer. It appears that she is stood, balancing on top of the sea, as the waves repeatedly roll around her. The colour and focus of the horizon, that once was clear and inspiring, creating feelings of happiness and limitless possibilities, instead now offers the viewer visceral feelings of concern and desolation.

Gemma Copp is a Welsh artist, who resides in Swansea, her city of birth. Graduating with a BA in Fine Art from Swansea Metropolitan University in 2006 and completed an MA in Contemporary Dialogues in 2009 at the same University. Copp predominately works with film and installation and her work raises a flux of visceral emotions relating to identity and basic human emotions and concerns.