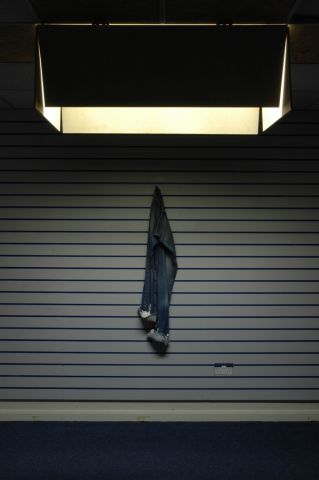 Castle & Elephant is pleased to announce its inaugural exhibition by artist Tom Godfrey. Godfrey’s work manifests itself in a range of media including sculpture, photography, video and installation. Taking as a starting point a found image, object or experience, works are often developed through the administration of a physical adjustment, a combination with a process or an amalgamation with other objects and materials. Resultant works are often reductive in nature, maintaining a commitment to the initial subject with often only the most minimal intervention being made to make the viewer question its status as an artwork. The exhibition title is taken from the Conservative strategy of 1974 to conserve energy usage by restricting industries to only operating for three days a week. The intention is to draw parallels between this tactic and the three day week opening hours of Castle & Elephant. Wider implications of this title relate to the context of the gallery in a shop unit, surrounded by empty and redundant commercial lettings.A specially commissioned interview held between Godfrey and London based artist Richard Paul will be available from the gallery.