the way I see - a-n The Artists Information Company 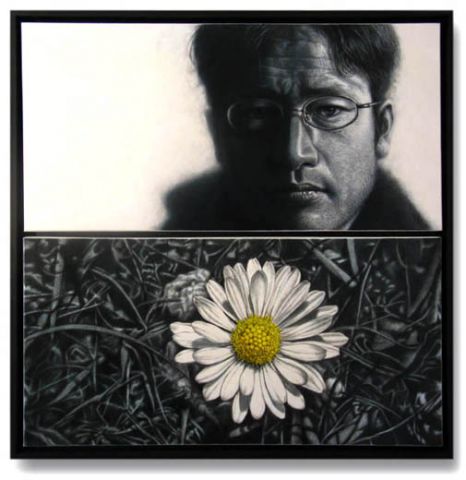 Hideyuki Sobue is a Japanese artist living and working in the Lake District where this project is based. This current exhibition supported by the Arts Council England is a series of portraits of people he has come to know personally, with each work designed to be exhibited in diptych style; one half featuring the portrait, the other a carpet of fallen leaves observed in the area. He considers the fallen leaves to be a metaphor for the frailty of life and to also symbolise the vast majority of people, often neglected, who have never been – and will never be – the subject of a portrait. In this way, Hideyuki says: “…I aim to create a platform of debate regarding existential, ontological and ethical dilemmas and challenge the fundamental meaning of portraiture…” This series of portraits is completed in the unique brush hatching technique Hideyuki has created using Japanese sumi ink and acrylic, inspired by the disegno method established during the Renaissance. This method ties in with neurological studies which show how the human brain perceives objects predominantly by oriented lines. The Brewery Arts Centre is proud to be showing this work for the first time; this touring exhibition will then move on to the Japan House Gallery, The Daiwa Anglo-Japanese Foundation in London.

Hideyuki Sobue, who lives and works in the Lake District, UK, graduated from Osaka University of Arts, Japan (awarded scholarship). His art practice is focused on painting and drawing, exploring how to derive the maximum technical and conceptual potential from those practices. Over the past 16 years Sobue has developed his original new brush hatching technique, using Japanese sumi ink and acrylic, which was inspired by the concept of disegno established in the Florentine Renaissance, combined with the ongoing study of neurology on a variety of themes. His aim is to create a platform bridging East and West, and our heritage and contemporary understanding, by means of drawing and painting through delving into the core meaning of human act of seeing.