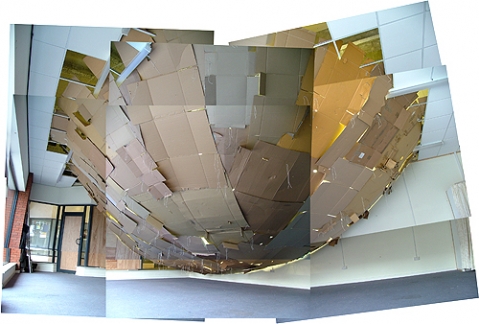 a location-specific installation sited in two vacant shop units at the duke street entrance to the mall in barrow-in-furness. the form of the work is derived from the curved bow of the vigilant, a vanguard class nuclear submarine built in barrow. the intention of the work is to make it appear that the submarine has dropped onto the building. however, instead of demolishing it, the building has adjusted itself to accommodate the shape of the hull.

Rich White makes multi-layered installation works about location, sense of place and the relationships that develop between people and their environment. http://www.counterwork.co.uk