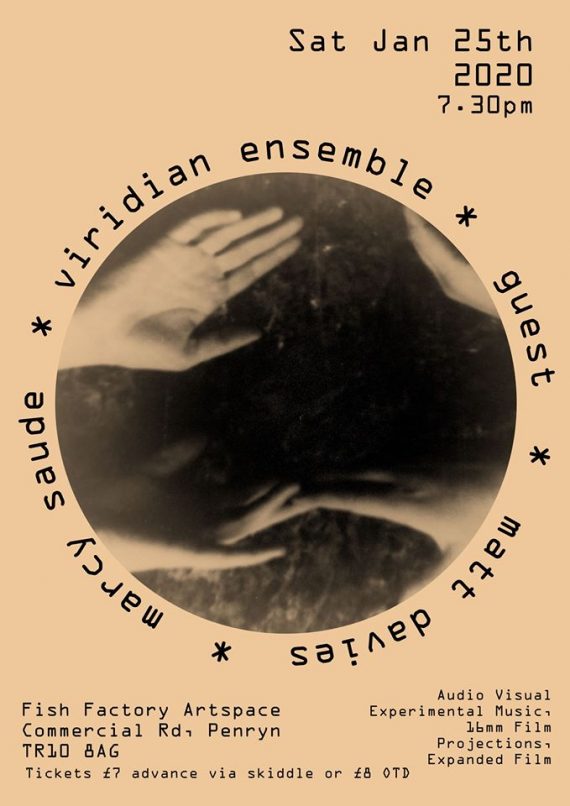 Viridian Ensemble is an ethereal blend of image and noise, which re-imagines folkloric forms and tropes of femininity. Improvisation of both sound and image (digital & analogue) produce a dialogic blend of textural depths. Dissociative states, keening, and the supernatural inspirit the ensemble. Each performance evokes utterances, nonsensical languages, and trans-species forms of communication through collective rhythm, tone, and resonance. Inspired by the vanguards of feminist free improvisation such as Les Diaboliques & Feminist Improv Group, as well as 16mm expanded film. Viridian is open to differing and divergent genres and levels of musicianship, including those who have not played before. A mix of differing abilities and visual media gives rise to a polyphonic performance of serendipitous enchantments. https://viridian.hotglue.me/

Matt Davies is an artist and field recordist who also uses 16mm film, shortwave radio and a variety of home made microphones to explore natural found rhythms and textures. Matt Davies is a member of BEEF (Bristol Experimental Expanded Film), a regular contributor to Bermuda Triangle Test Transmission Broadcasts and co-founder of Field Recording Discotheque.http://www.audiblefields.com

Her debut project heart is a precarious system of loops, which often break or falter. Using 16mm film and a foetal heart monitor, she builds up a thick, bloody and trance-like display of her insides.

Marcy is an artist filmmaker with an affinity for performance and photochemical experimentation. She received a BFA in Film/Video from the California College of the Arts and an MFA in Studio Art from the University of Colorado at Boulder. A member of BEEF (Bristol Experimental and Expanded Film) and the Filmwerkplaats artist-run lab in Rotterdam, her moving image work has been presented at film festivals, galleries, and artist-run spaces internationally.