Wish You Were here? - a-n The Artists Information Company 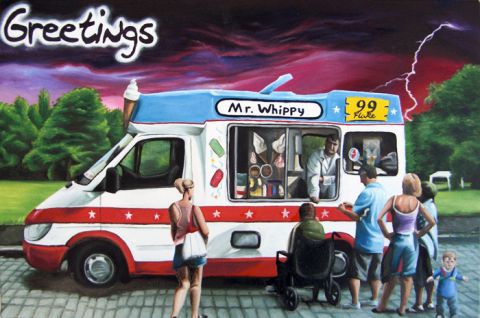 Private View on Sunday 19th July, 6-8pm Gemma Cumming’s work deals with notions of anticipation and tourism, utilising tourist imagery to create giant painted postcards with an ominous twist. Centering around notions of failed perfection, her work primarily explores imagery that sells an expectation of a place, not its reality. Creating tension by replacing the stereotypical blue skies with darker and more ominous ones, adding other incongruous objects and highlighting people’s passivity to their unusual environment, the viewer is forced to look again at the scene. In the lower bar we have photographs by Chris Hutchinson: large-format, acid-bright underwater scenes of model Beata. Chris began photographing industrial landscapes as steam trains were disappearing from Britain’s railways. In recent years he has tried to capture the human face and form in new ways. He likes to confuse and amuse people who see his images.