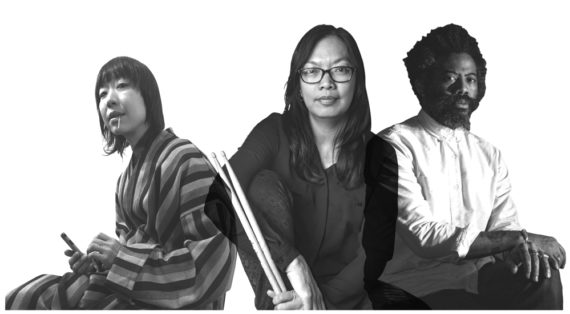 Improvisational luminaries YoshimiOand Robert Aiki Aubrey Lowe will be performing together across the United Kingdom for the first time. Yunohana Variations will be supported by local collective Bizarre Rituals.

Tickets are £8 or £5 with student discount. They can be purchased here: https://www.eventbrite.co.uk/e/yunohana-variations-tickets-46839528290

A perfect evening for lovers of both jazz and performance art.

Though the trio have never performed live in the UK together before, they have collaborated to record an album, Flowers Of Sulphur, which was released on Thrill Jockey in February this year. Find out more about the album here.

YoshimiO is a drummer and member of the revolutionary group Boredoms who also plays
guitar, keyboard and trumpet. She is the leader of the experimental band OOIOO, a member of
Free Kitten with Kim Gordon (ex. Sonic Youth), and most recently the vocalist in SAICOBAB
– a quartet who blend ancient Indian musical traditions and instruments with electronics and
modern sounds. Known for her ability to improvise in a variety of contexts, YoshimiO has
previously performed and recorded improvisational music with saxophonist Mats Gustafsson,
Jim O’Rourke, and recently with Lowe, and then Ibarra during a series of collaborative
performances in New York City, late in 2015.

Robert Aiki Aubrey Lowe is a multidisciplinary artist whose practice is strongly rooted in exploration of moments and the hypnagogic state. Movement and gesture play key factors within this process, and in the performance realm are focused on by voice and modular synthesizer. A fixture of Chicago’s experimental community throughout the 90s and early 2000s, Robert has also performed under the name Lichens, is a member of the legendary band Om, and has an impressive portfolio of collaborations, which extends to the film world with his score for pseudo-documentary A Spell To Ward Off The Darkness, directed by Ben Russell and Ben Rivers (which Robert also appears in).

Bizarre Rituals are a collective of artists, musicians, DJs and VJs who are based within or around Devon. Together they throw parties; create EPs, albums, film soundtracks and mixtapes, and do shows on local FM arts and community radio station Soundart Radio, which is transmitted out of an oak tree.

This performance is commissioned by OUTLANDS; the new national experimental music touring network and is supported by Arts Council England and Esmée Fairbairn Foundation.