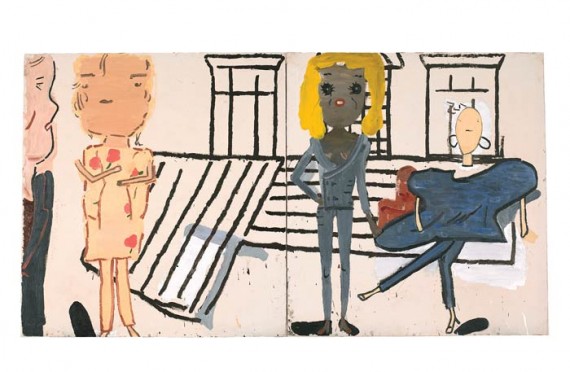 From a longlist of 50, the 5 artists shortlisted for the John Moores Painting Prize 2014 have been announced. Rae Hicks, Juliette Losq, Mandy Payne, Alessandro Raho and Rose Wylie are now in the running for the first prize of £25,000, to be awarded in September.

The judges for this year’s edition of the biennial award are Tim Marlow, Director of Artistic Programmes at the Royal Academy and artists Lynette Yiadom-Boakye, Zeng Fanzhi, Chantal Joffe and Tom Benson.

Marlow commented: “It’s for the visitors to make their own minds up about the state of contemporary painting in Britain but based on my experience of judging the John Moores this year I’d say it was quietly confident, expansive, hard-won, self-critical, vital and engaging.”

The 50 longlisted paintings were selected for exhibition from over 2,500 entries. The Prize Exhibition opens tomorrow 5 July at the Walker Art Gallery, Liverpool, as part of the Liverpool Biennial.