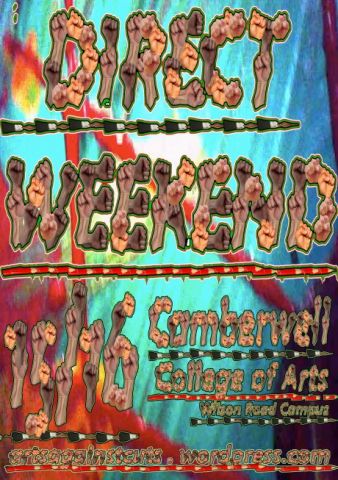 Following on from the success of the Long Weekend at Goldsmiths in December, the Turner Prize and National Gallery teach-ins, the Book Bloc and the many occupations at art schools and universities across the country, Arts Against Cuts has organised a second weekend of direct action and planning as the fight against public sector cuts increases.

Arts Against Cuts was initiated across London art schools last autumn with a view to reclaiming the public, critical space that universities and art schools should be. Transforming buildings into “art schools for the future”, both the Long and Direct Weekend have brought together artists, students, cultural workers and those fighting cuts from across the UK.

A feast of non-stop workshops and how-to sessions ensued, along with skill-sharing sessions and spontaneous expressions of creativity. Art activist groups including AIR Activists and Artists of the Resistance were present, with talks delivered by Government of the Dead and Object Sabotage member Evan Calder Williams.

1970s cover band and neoliberalism study group, the Chicago Boys, provided live music and an interactive workshop on globalisation and education. Screen-printing and banner making also took place throughout the weekend, alongside a temporary exhibition space, the Communist Gallery.

A representative from Book Bloc also ran a “how-to” session, explaining the use of books as a method of bringing attention to the neo-liberal ideology of the Con-Dem government.

Preparations were made for upcoming demonstrations and occupations, including the Southwark Save Our Services teach-in (17 Jan), the EMA Day of Action (18 Jan), Arts Against Cuts march on parliament (29 Jan) and the TUC mass demonstration (26 March).

This was a galvanising show of unity and call to arms as cultural workers continue to show vigour and verve in the face of adversity. A fresh demand for emancipation from the destructive structures imposed on artists is gathering pace. As Arts Against Cuts explains, “It’s not important what art is but what it does, and right now it has the potential to turn the crisis of cuts into an opportunity for change.

Click here for more information on Arts Against Cuts. 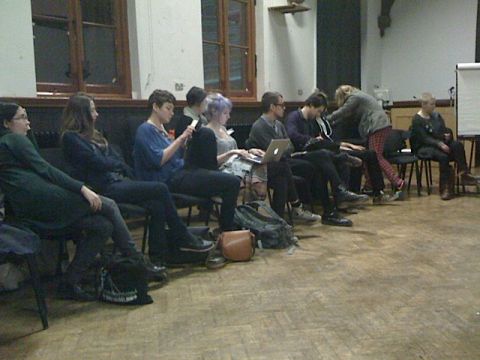