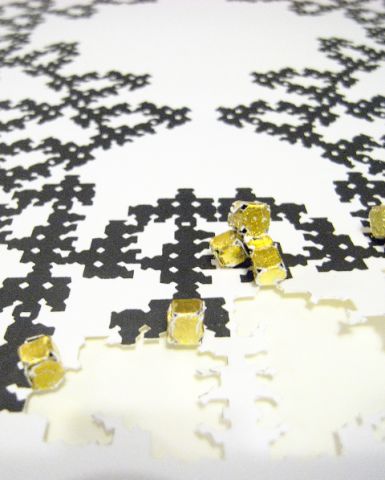 Artist’s whose practice is predominantly drawing, like mine, sometimes approach printmaking with a feeling of missing the actual mark of the artist’s hand, and a vague notion of the printmaker being somehow detached from their subject due to the nature of the process. However, not only was this not the case but Gill Saunders’s catalogue essay actually addresses the question of how print is often discriminated against due to the ‘ongoing confusion between those vexed categories, ‘original’ and ‘reproduction’; finally concluding that it ‘is now embedded in contemporary fine art practice’, continues to thrive’ and ‘defies definition.’ This was helpful in setting recent print-making history and debate in context.

In fact, rather mischievously, Surface Noise showed how the artist’s hand can be present in many different and unexpected ways as the viewer discovered prints that had been physically cut in to [Janne Malmros]; prints that had been hand-pasted onto the wall like billboard posters [Michael Fullerton]; and even a series of prints [Dororthy Cross] that featured a pair of entwined hands at the heart of them.

Dorothy Cross’s ‘Tear (i-v)’ was inspired by an Old Testament illustration of Naomi saying goodbye to Ruth. The consequent prints – like a transcription – reconfigure and enlarge areas of the original print – an ear, eye, face and hand – and place them above or within a rough green sea, as though one woman’s tear had, literally, become a sea of tears. In Cross’s words: ‘Narrative and nature are momentarily stilled’. The viewer is constantly drawn back to the single tear of the title, and the first print – which is a mini-testament and homage to the story of the salvaged bible, itself, and the ‘exquisite control of cross-hatching’ in the original – as well as the set of entwined hands that are the physical manifestation of that emotion.

If the hand of the artist was an unexpected presence then at the opposite end of the scale another shared similarity between the works is some sort of ‘lack’, or ghostly disappearance.

In Carolyn Bunt’s photograph: ‘And when I looked up it had gone’, a red and white, neon-lit, petrol station [possibly Russian] hovers in an invisible landscape. The cool aesthetic of this image is all-encompassing, and one immediately questions the reality of what one is seeing. is it a bona fide structure in a genuine landscape or it is a trick, something modelled to look real. Momentarily, the work of Thomas Demand comes to mind. On closer inspection the invisible landscape is found to be a wilderness, a snow-sodden panorama, whereupon, the model mirage fades back into reality. Maybe.

In Claire Bayliss’s monoprints, we touch upon traces of the pre-war landscapes reminiscent of artists like Eric Ravilious and Graham Sutherland. Bayliss chooses a similar subtle palate of dull, nostalgic colours. Images of odd angular shaped boulders – standing stones – prevail in a deserted landscape, their dusty faded quality, appearing almost like a bad print one might discard. Yet, looking closer, these stolid ancient objects retain a hand-drawn quality, albeit printed, that suggests a once human presence – now missing.

There was an audacity to some work, and Michael Fullerton’s large-scale, billboard-style screen prints of radio presenter, John Peel, entitled: ‘Peel Session, Maida Vale Studios, February 4, 2004’, had precisely that bad-boy tension; taking up a whole wall and moving from representation to semi- abstraction. However, the fact an image like this – destined for fine art establishments – has been reproduced on here-today, gone tomorrow newsprint, is a wry take on the whole question of the value of a print, in terms of its ‘reproductive medium’. To talk about a newsprint ghost of the now deceased John Peel would be, perhaps, too obvious. But here again we find a distinct, clear image fading away.

Claire Barclay’s plain-coloured screen prints of cut shapes placed upon the ghost of another shape beneath, were pure in their simplicity, but reminded one of Russian Constructivist creations from the 1920’s.

Another bold undertaking came from Janne Malmros’s unsettling but witty technique of creating simple black and white prints of octagons, and then taking the scissors to them, creating a series of 3d folded gold octagons within the same print.

Likewise, Scott Myles reproduction of a pair of giant cardboard files, turned out to be one of those rare objects where viewers are witnessed to gasp audibly in sheer wonder. Here, ordinary office tat – a pair of cardboard files (‘Elba blue & black’) – are enlarged to the width of a whole 5ft.5 body span, arms outstretched, and neatly presented in a Perspex box.

Similarly, the pair of prints by Myles that spelled: ‘Hot’, above, and then: ‘Sand’, below, made viewers laugh. And when observed closely reminded one of the marvellous hand-printed quality that many of Andy Warhol’s collection of Marilyn Monroe printed and hand-painted canvases possess. Here the pale ghost-prints of several attempts to line up the letters were apparent, as was in this process, the hand of the artist, the artist’s own physical mark.

Here, curators Gill Saunders & John MacKechnie, have picked out some great examples of what promises to be an exciting, and ever-expansive future for the discipline of printmaking, and the exquisite idea that in its rebirth it ‘defies definition’. 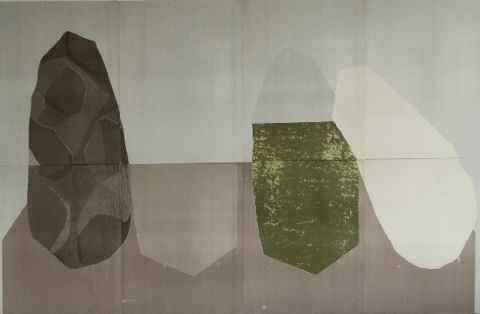