The Life of the Mind: Love, Sorrow and Obsession - a-n The Artists Information Company 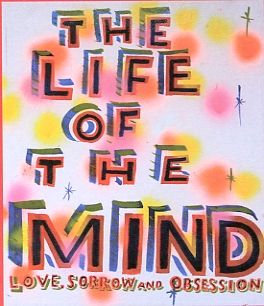 ‘Eppy Daddy Battle Bot’ confronts the visitor to the New Art Gallery, Walsall, with a fusillade of appropriated rod protuberances, worn metal panels, dilapidated aerials, and wiry connections. Towering over the gallery-goer, the assorted off-cuts of wood that make up the bulk of this robotic incarnation of the sculptor Jacob Epstein, are painted in the distinguishing style of its creators, Bob and Roberta Smith, whose curation of the exhibition within the gallery – ‘The Life of the Mind: Love, Sorrow and Obsession – has been inspired by an extensive residency at the New Art Gallery, the home of the Epstein Archive. Hand painted on the four sides of the ‘Battle Bot’, Bob and Roberta Smith briefly relate major episodes from Epstein’s life, recounting the opposition and hostility he met as a modernist artist and a Jew. We learn from accompanying documentation in the archive that Epstein’s sculpted stone figures for the BMA building in the Strand, originally numbering eighteen, were deliberately disfigured after their unveiling, and could still be seen in this sorry state as recently as 2009. The tragedy that befell his son and daughter by Kathleen Garman, Theodore and Esther, is reflected in the themes from which Bob and Roberta Smith have formulated the exhibition, as Esther’s obsessive love for her brother, and sorrow following his premature death, eventually led her to take her own life.

Such a culmination is barely imaginable looking at Epstein’s sculpture, ‘First Portrait of Esther (with long hair)’ (1944), which shows, the curators note, a defiant young woman disregarding the scrutiny of her examiner. Although the marks of the sculptors modelling are visible over the surface of this bust, he hasn’t, the curators point out, penetrated the inner spirit of the sitter, and the mistaken notion of acute masculine artistic understanding has underpinned much of the selection of work for this show.

The consideration of the archive has enabled Bob and Roberta Smith to dwell on the human experience of life, and how we are affected by its eventualities. An initial example of this focus may be found in Emma Talbot’s Time Passes, a diary-like visual depiction in watercolour of momentous and significant events derived from the artist’s life, but which have an aspect of a prior era. The sequence of sixty plus small drawings on paper illustrate scenes and experiences with which we may all have some familiarity: affection, loss, family, love, sex, yearning, grief, death, and Talbot’s striking use of non-identifiable figures and deft graphic imagery heightens our recognition of these moving scenarios.

Adjacently we may notice another familiar scene, the domesticity of a lounge recreated in a corner of the gallery with sofa, hearth side rug and flaming fireplace, albeit displaying some untypical reading matter on the mantelpiece, including DSV IV and reference tomes for psychology and mental health. On the large screen wall-mounted t.v. Bobby Baker’s show How to Live, recorded live at the Barbican, is playing, offering the artist’s eleven rules to happy life. If, in the retrospectival imagination of Talbot’s characters such qualities as ‘valediction’ and ‘charm’ had been more frequently encountered, as Ms. Baker asserts are necessary, the air of mournfulness and disappointment inhabiting Talbot’s world would not be so prominent. Bobby Baker posits consideration of oneself as a frozen pea, and in several comic situations explores strategies and rejoinders that make common sense, but are here presented in such a manner as to have a disquieting similarity to many stand-up comedy routines. Her stance as an affable off-duty psychiatrist leading an interactive conference seminar (audience laughter is very apparent) follows through the message, though the dénouement is saved for the dancing peas ending.

Passing through to the next room, easily missable on a side wall, are a pair of small drypoints from the Tate by Louise Bourgeois, showing simply in one the head and shoulders of a girl, in the other the back of a boy turned away from us. Perhaps the opposition in these poses indicates the emotional predilections of the female and male gender, but their touching unaffectedness is a precursor to Bourgeois’ larger sculptural piece to follow, and is also a referent to the re-surfacing theme in this exhibition of Esther Garman, and her relationship with her brother Theodore.

Cell is a work that again is redolent of memory, and of summoning up the stifling atmosphere that Bourgeois perhaps encountered as a child in the family home. Encaged by time worn metal mesh and aged green house glass, a massive pair of carved marble spheres protrude from the sockets of their more rough hewn ovoid surround. The area within the cage is furnished with mirrors reflecting the marble ‘eyes’, wherever they look their view is reflected back. The eerieness of this arrangement, made more so by the displanted materials, provides an atmosphere of unavoidable scrutiny from which the viewer also cannot evade. The sense of entrapment within this situation is moderated only by the restless resistance that the personified marble exhibits.

The outcome of one obsessive relationship that had dire results is depicted by Jessica Voorsanger, who, we are told, was not unaffected herself by the fame and celebrity of one of the party. The artist’s paintings Andy was controlling my life too much and I shot Andy Warhol (both 2010) show scenes from the well known episode in Warhol’s life when one of his studio assistants, Valerie Solanos, shot him and a couple of Warhols’s associates. The works have a cartoon-like simplicity portraying single moments of the action almost like a film still. Speech bubbles are included which falter the events to a static instant and render obvious, if further evidence were needed, the subject of the action depicted. The artist employs a style that relinquishes superfluous detail, but gives little indication of the state of mind of the perpertrator or of the import of her actions.

Conversely, the potential effect of another artist’s public actions are at the forefront of her works proposition. Anne Bean’s film Shadow Deeds, showing a variety of incidents that were apparently first performed between 1969 and 1974, includes sequences of the artist shouting the word “mortality” in several locations at a seaside town. If the ingression of this grand artistic theme into the lives of daytrippers and passersby were meant to address anybody other than we, the gallery going viewer of the recorded film, then the piece neglected to take account of the typical reticence of the (presumably) British public (who, at most, turn their heads to see what all the shouting was about). There is, however, something rather shocking about the close-up view of a woman’s head shouting a single word at the camera, when this vocalisation seemingly has so little to do with the context in which it takes place – but which, in a more profound interpretation, is unavoidable.

Throughout the exhibition the curators have provided informative and helpful comments about the works and the artists, hand painted on shards of plywood, and these have an appealing informality that sidesteps the usual gallery labels, though these are also present.

Central to the premise of the exhibition is the narrative of Epstein’s life, and more particularly that of his daughter Esther. The archive material shown, including newspaper cuttings, family photographs, letters and dates from a calendar, has a poignancy that could be found only in the most intimate of exchanges, and which, the curators emphasise, Epstein was not able to reach in the bust of his daughter. Reading the story and the letters of Esther’s life is a saddening experience, and relating its details here could not give it adequate regard.

There are, nevertheless, a number of works that focus on such human connectedness, though with vastly different implications. One may have to rebuff one’s expectations of a work one knows to be by Tracey Emin, for her self-photograph The last thing I said to you was don’t leave me here II (2000) shows a humiliated and dejected figure that emanates the need for sympathy. The effect is all the more striking as only the naked artist’s back view is presented, but the crouching pose, with lowered head, seemingly exposed and vulnerable, is imbued with insecurity and pity.

Van Gogh’s drawing of his prostitute lover, Sien, entitled Sorrow (1882), has a similar tenor of desolation. She sits sunk with her head on her arms, the expression on her face not visible, but her feeling clearly expressed by the posture, and van Gogh’s encapsulation of sincere emotion in a small black and white image is unequalled.

‘The Life of the Mind’ is very effective in conveying Bob and Roberta Smith’s topic, and this collection of pieces, which includes also notable works by Helen Chadwick, Jennet Thomas, Chris Ofili, Yayoi Kusama and artist in residence at the New Art Gallery Sean Burn, amongst other well known practitioners, has been thoughtfully and strongly curated. The object of featuring “the interior worlds we all retreat to in order to rationalise our very own feelings and emotions” (from the introductory text), has been so amply illustrated that any imaginative interconnections left to the viewer can perhaps only be found in great application to the individual works, and seeing for ourselves something that hasn’t been told or suggested thus far by curators or gallery. If this requirement encourages the viewer to reflect on their own disposition and become as inspired as Bob and Roberta Smiths curatorial residency has been for them, the exhibition will have born fruit.