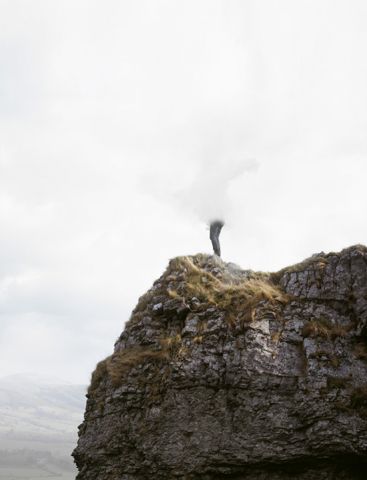 Like the ‘wanderer’ in Caspar David Friedrich’s painting of 1818, Axel Antas stands in the centre of Obstructed View (Boulderstone), (Treetop) and (Cliffedge) in solitary contemplation. But in a tragicomic twist his views of the landscape are almost completely obscured by artificial smoke clouds that rise around his body.

The photographs explore relationships between man and nature, nature and artifice – enacting a push-pull exchange in which Antas both dominates the wilderness and is overwhelmed by it. In a puff of smoke he is at once sorcerer and apparition: master of the scene (the visible – albeit wavering – line of the shutter-release cord betrays the presence of his camera beyond the frame), yet also excluded from it. In (Treetop), the artist’s image is particularly fragile and the balance for a moment seems tipped towards nature; but then, below the hillside, grids of cultivated fields spreading into the distance reaffirm technology’s powerful encroachment on the land.

In Untitled (Sketch of a Tree) an 8mm film loop and a small pencil sketch describe what might be the world’s oldest living tree. The filmstrip runs from the projector on the floor to rollers on the ceiling then back down to the machine, drawing loose vertical lines across the gallery. The projection itself is diminutive, focused in a small rectangle at skirting height. Battling against the fierce ceiling lights, the imposing structure of the expanded apparatus and the weighty pillars that divide the basement space, the image is completely overpowered. The pencil sketch is similarly self-effacing, as though demonstrating the inadequacy of any human-scale representation of such an immense natural system.

Geometry of Place (Constellation) is a black and white print of a forest clearing into which Antas has tied taut white strings to create a geodesic framework around the trees and broken stumps. These 3D drawings are intricate and beautiful, almost like a giant spider’s web if it weren’t for the rigidity of the lines, the precision of the intersections that betray its self-conscious construction.

Framed within the slick architecture of the London gallery, Antas’ work aptly describes a city-dweller’s relationship to the natural world: attempts to measure, configure or otherwise take on nature merely highlight our separateness from it.