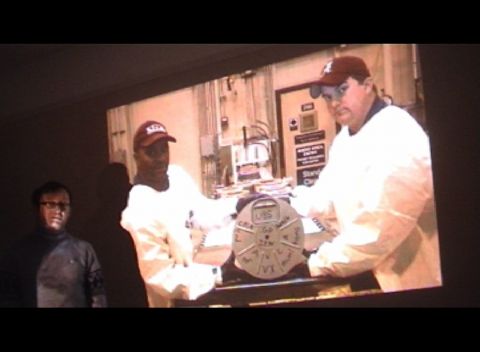 This means I’m in a good position to reassure potential visitors that ignorance is no barrier to the enjoyment of this exhibition at Exeter Phoenix. All you really need to know about the plot of Monte Cristo is that it involves – amongst many other things – romance and revenge, treasure and treachery, caves and prison cells, and passion and piracy.

The exhibition is presented as a group show with individual works by Annabel Dover, Cathy Lomax, Hayley Lock, Alex Pearl and Mimei Thompson, but it’s really more of a large collaborative piece. The artists bounce themes back and forth between themselves, and their works cross-reference each other in a complex game of flattery, theft, borrowing and impersonation. It’s as if someone gave the novel a good shake and all the best bits fell out. And what a lot of bits there are.

Cathy Lomax’s sketchy paintings compare different incarnations of key scenes or characters from the many film and TV adaptations of the novel. These connect to Hayley Lock’s bejewelled, collaged portraits of aristocrats with lumps of rock where their faces should be. These in turn find an echo in Annabel Dover’s delicate drawings of gemstones …which are infiltrated by Alex Pearl’s drawings of multi-coloured belly button fluff in identical frames.

Meanwhile, Mimei Thompson’s mesmerising paintings of caves, rich with symbolic and psychological overtones, have an echo in Hayley Lock’s blanket-covered den, full of vajazzled stalagmites. This darkened space, in turn, is mirrored by Alex Pearl’s projection space, situated at the opposite end of the gallery, where we see him plotting the mass murder of fellow artists in Operation Pusscat.

This particular pairing of Lock and Pearl’s two enclosed spaces and their darkly humorous contents seems pivotal. Lock’s giant phalluses/vaginas pearled on the outside and jewel-encrusted on the inside and fitted with spyholes suggest a bizarre dirty joke that evokes both the funny and the sinister aspects of desire.

Meanwhile, a visit to the video presentation taking place in Alex Pearl’s cave takes us from knowing laughs about the excessive number of artists in the East End of London to a horrible scenario of gassings and body bags. It’s the dark heart of the James Bond fantasy – the way we make light entertainment out of intolerable cruelty.

This is an island, isolated from the rest of the world, with its own landscape and culture. It’s also an island among many other fictional islands, trading on a network of narratives and memories: Treasure Island, Robinson Crusoe, The Island of Dr. Moreau, Lord of the Flies, Gilligan’s Island… Islands are places of fantasy and escape, but also of imprisonment and savagery. While we’re encouraged to enjoy the frivolity, playfulness and excess in this show, we’d do well to keep looking over our shoulders for lurking pirates and angry natives.

It’s probably a coincidence that the exhibition opened on 1 April, but it is a strong hint you’ll find little in the way of true stories here. Follow up the 10 web links offered at the bottom of the gallery blurb and an even more complex plot unfolds involving the artists’ patron, the seventh Earl of Wilmore and a lost segment of The Count of Monte Cristo set in Suffolk. (As if the 117 original chapters aren’t enough.)

Like eavesdropping on an animated conversation, Monte Cristo is a welcome change from the rather forced joined-upness of some group exhibitions. These are artists enjoying themselves together, drawing strength and inspiration from common territory. But there’s also a sense in which Island of True Stories feels like a private joke, a closed island community to which we are only admitted as tourists.

The Count of Monte Cristo: Island of True Stories is the first in a series of exhibitions inspired by Dumas’ novel. The next chapter will be unveiled at the Rogue Project Space, Manchester at the end of April.