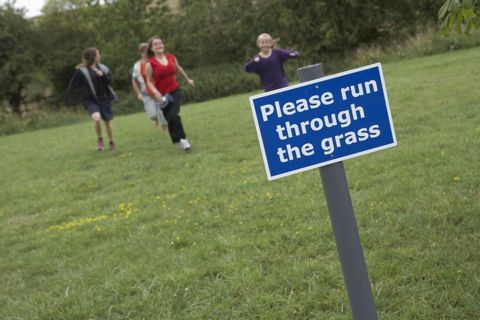 ENCOUNTERS, journeys through language and landscape is an expansive installation, resplendent in its occupation of the three mile route that hosts it. Offering an experience that seems episodic at the outset and continual by the end, Encounters is layered in such a way that ones perspective shifts organically in a perfect reflection of the landscape-canvas.

The route, from Fermynwoods visitor centre to Lyveden New Bield, is harmoniously punctuated by a series of physical installations. Shane Waltener’s jute weavings draw the eye like optical illusions, making three dimensional space visible and eliciting a consciousness of the way we move through natural spaces. Two listening stations, resembling open fronted sheds, burst into song when entered – based on a Tellervo Kalleinen and Oliver Kochta-Kalleinen concept, Paula Boulton shaped the songs based on collections of complaints solicited from local people, which were subsequently sung and recorded by the resultant Corby Complaints Choir. Rebecca Lee’s installation, Great Chorus, is slowly being claimed by the forest clearing, which is inhabited by a harmonium and music arranged from twenty-one song choices procured from forest visitors. Jitish Kallat’s bone-text snuggles, doglegged, in a small, grassy valley that surrounds Lyveden New Bield, asking an open question on the one side – ‘when will you’ – and issuing an imperative on the other -‘be happy’. Inside Lyveden New Bield, but still open to the elements, the climax of the route is reached: on a viewing platform, in front of an incomplete but imposing stone bay window, Caroline Wright’s crafted words are hung, illuminated green – truth, harmony, peace and tranquillity – framing the far-reaching landscape ahead.

Though naturally befitting of the surroundings, the installations nonetheless become further enmeshed in the landscape and in the holistic experience of Encounters though artists’ walks that proffer an enticing layer of collective experience. The heavy rain seemed almost the source of camaraderie during my first walk along the route, during which, Alison Lloyd stimulated much thought about the act of walking. Pausing in a variety of places along the route, and supplying choice readings, solicitous questions, and shared silences, Alison illuminated the potency of walking as a means of both personal and artistic expression. Rebecca Lee’s guided walk provided insight of a different kind – and a venture inside someone else’s head. Rebecca provided the collection of tracks on mp3 that had been gathered from visitors and that subsequently formed the basis of the organ soundtrack in Great Chorus. Alternately listening to tracks on headphones and capitalising on our temporarily re-tuned aural sense, we responded anew to the landscape and the work. For those walking the route alone, Caroline Wright delivers a lyrical voice for the ear, a fleeting companion that makes one conscious of the texture of the land underfoot.

These collective walks, works of art in themselves, also served to impress upon me how thrilling it is to experience something with others and to see (and hear) something from another’s perspective. The process we each go through to animate a work of art, to understand it, is magnified by a shared time and space, and becomes something much more real in the thick of passionate conversation.

The sense of community that pervades Encounters is revealed in the consultative process of curation that made local children an intrinsic part of the team. Meadowside primary school and Keely Mills collaboratively determined a collection of pertinent messages for walkers along the route, erected as official signposts giving instructions like ‘please run on the grass’ and (slightly tongue-in-cheek) ‘remember health & safety man’. The signs have proven so covetable, that they keep being ‘liberated’ from their posts. The collaboration reaches its evocative pinnacle with two signs attached to trees towards the end of the route when Lyveden New Bield is visible and present –

Here you can smell dampness

Here you can be touched by rain

Here you can feel the roots of old tress

Here you can hear the wind

– statements that attest to the unrivalled pleasure of being outdoors.

Rebecca Lee’s focus on filling in ‘the gaps when words don’t work’ seems portentous to me: the experience of the aptly-titled Encounters, to its enduring credit, simply and beautifully defies description.

Producer and fine art graduate based in the East Midlands.