Out of Sight - a-n The Artists Information Company 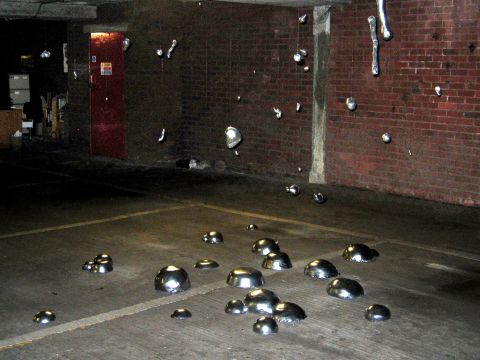 In earlier reviews posted here I have written about my and other artists’ dismay at the apparent lack of contemporary visual art in the Bournemouth-Poole conurbation. I stress ‘apparent’ because this is not to say that such work does not get made here, only that making it visible is hard because of the shortage of suitable venues. Unlike the UK’s many former industrial cities that now have old factories to reuse as studios and galleries, this area has a different heritage and few such buildings. What is also of significance is that there is no major focal point gallery here, like a Tate, Arnolfini or Baltic Wharf, which would create interest, educate tastes and encourage more independent creativity around it. The area does have the Russell-Cotes Gallery, which is a beautiful building and does have some small contemporary exhibitions. It is, however, mostly dedicated to the 19th century collection of art and artefacts that belonged to the Russell-Cotes family.

In a recent review, however, I was able to write about the encouragement I felt at having seen a couple of artist-led events that may signal that change is under way. Non-art spaces have been adapted, including Bournemouth’s town centre gardens, a bandstand and even public toilets. Out of Sight is another such example and is hopefully a further step in the right direction.

The show is staged in the underground car park beneath the Wilkinson’s store in Winton (a suburb of Bournemouth). It is led by student George Bills and is mostly a student show, with one or two graduates.

There is no overriding theme. Many ideas are approached in many media: painting, photography, performance, sculpture, installation and more. It is inevitable that some of the work struggles to make an impact in the poor lighting and semiotic intensity of an underground car park, and much of what works best is that which is geared to this kind of space or is actually site-specific. Denise Poote, for example, takes the yellow and black stripes that highlight the concrete pillars and translates them into a mesh of delicate threads. Between the floor and ceiling, H. Mackenzie suspends silvery droplets, which look like giant beads of mercury shimmering in the half-light and dropping down onto the concrete.

Overall, as one might expect of a group mostly student show, the quality is varied. What is to be applauded, however, is the gumption to get this thing on in the first place and to have the nerve to take creative risks, rather than bury oneself in safe conservatism. As they said when punk emerged a few decades ago: what matters more than what they’re doing is that they’re doing it at all. Better to have a garage band make your ears bleed than have the Bee Gees and Brotherhood of Man corrode your soul.

Dr Stephen Riley is an artist, writer and lecturer. Interests: the physical and cultural structures through which visual representations are made and made visible; the cultural uses and implications of spaces, images and media. Media: painting, photography, text. He has exhibited since 1990 including UK, China and Germany.