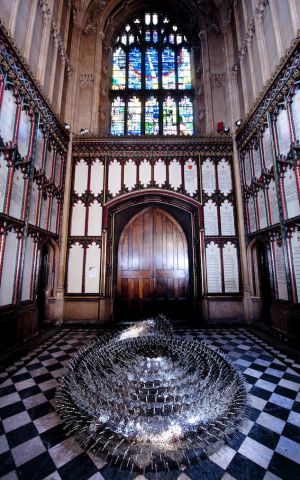 Time and Generation are the themes of the Asia Triennial Manchester 2011. The first Triennial in 2008 had the theme of Protest, connoting the confrontational and political. This year’s offering encompasses the subversive and challenging together with more contemplative and slow burning works. ATM hasn’t lost its edge, but expanded its scope.

The ambition of the Triennial is high — its press release states that 17 venues, 13 countries, 40 artists and 32 new commissions are part of ATM 2011. The programme is weighted towards South Asia — the Triennial is run by Shisha, a Manchester-based arts organisation specialising in South Asian arts — but it also includes artists from Korea, Japan, China, and Turkey amongst others. The shows cover a wide range of disciplines, including traditional and contemporary crafts, film, digital media, painting, sculpture, and installation. With the remit so wide, I found the most successful works were the ones that directly related to the context of Manchester — after all, the city looms large in the Triennial’s name.

Adeela Suleman’s newly commissioned piece for Manchester Cathedral is a good example of the Triennial at its best. Steel, spiky drain covers are enmeshed to form a large spiral structure across part of the cathedral floor. Like a man-made mollusc, it looks frozen in movement; part of its ‘tail’ rises upwards, as if it is uncoiling. It is called Drained — which puns on the sculpture’s material source, but also references the spiral of water that goes down a plughole. We are used to being awed by the height of things in cathedrals; they draw us to look upwards. Here, we are made to look down at the floor, at this thing that rises a little more than a foot high at our feet, and bristles with spikes. The shine of metal surfaces chimes well with the gilt surrounding the cathedral altar; light bounces off the drain covers and shimmers on the marble floor. Incongruous, but earning its presence, Drained is an exciting centerpiece in the ATM programme.

Another work that bristles with confrontational energy is Life in the UK / Balance of Probabilities at Castlefield Gallery, by Didem Ã–zbek and Osman Bozkurt of PiST///, who are based in Turkey. The front of the gallery is papered with strips of text taken from letters of complaint by rejected visa applicants (the Moaning Wall). You step in through security doors and an alarm bleeps; ahead of you is a ticket machine that dispenses a number to show your place in the queue — to the unsuspecting visitor, this could be any visa application office (it is modelled on those that ‘pop up’ across Turkey in a range of institutional buildings). Throughout the show the tropes of migration, borders, tests and control are all dissected with a dark humour.

Quieter, but no less ominous, works are on display at Dark Matters at the Whitworth Gallery. The show is an intelligent and sophisticated exploration of shadows in contemporary digital art practice, shown alongside related investigations by artists in the Whitworth collection, including Rembrandt and Francis Bacon. Among the standout works is The Veil by Ja-Young Ku, commissioned for ATM. Filmed in — and projected onto — a corner of the gallery, the ‘ghost’ (or shadow) of the artist is shown installing a plaster sculpture of himself. The piece is layered and mesmeric — playing well with the concepts of time and memory.

Other exhibitions include a major retrospective of Rashid Rana at Cornerhouse, and an engaging presentation at the Chinese Arts Centre, showcasing artist-led initiatives in China. A smaller show, Made for Manchester, is less focused — somewhere between a craft boutique and a gallery. ATM is structured around a few key shows as its spine, with a cluster of smaller events and exhibitions adding bulk to the programme.

For me, the Triennial was completed by a broad sweep of works from the John Rylands archive, in the exhibition From Kashmir to Kandy. I walked around this show with a garland of small, sculpted heads around my neck — a Thought Mala, made by internationally renowned artist NS Harsha. It was odd wearing an artwork — I felt responsible for its safety and conscious of its seeming delicacy. The heads rattled a little as I walked. Wearing this piece of contemporary art (and getting a few odd looks as I did so) I viewed old scrolls, illuminated books, and archival correspondence — including letters between the heads of state of India and the UK in 1947, when India was declared independent of British rule. It was good to see a broad context for South Asia’s prominent cultural role in the UK — the concrete political history of conquest and exchange that weaves the two places together. Some of its complex and chequered past is brought into the present by two startling photographs by Simon Norfolk, documenting the aftermath of the 2001 invasion of Afghanistan. In the display case alongside them is a letter about the first Anglo-Afghan war (1838–42) describing one of the worst disasters in British military history (the massacre of all but one survivor of its army as it retreated to Jalalabad).

The ATM 2011 encompasses a vast sweep of territories and histories. As a survey show of Asian art, it inevitably falls short — the continent is simply too vast for such an overview. What the Triennial does do, and with excellence in several examples, is commission new works (many of them site-specific), and provide a route across Manchester taking in all of its best venues. As I returned my Thought Mala to the front desk at the John Rylands library, I reflected on how the celebration of cultural diversity and a globalised world comes with its shadow side: a history of rifts, tensions, and human catastrophes.

As with the recent survey shows on African art (such as Africa Remix at the Hayward Gallery), an exhibition (or even a Triennial) cannot capture a continent — I would not expect to see a ‘European Triennial Delhi’, for example — but it can show us instances of exchange and cross-fertilisation, within the microcosm of contemporary art.