Fran Cottell: BACK to FRONT - a-n The Artists Information Company 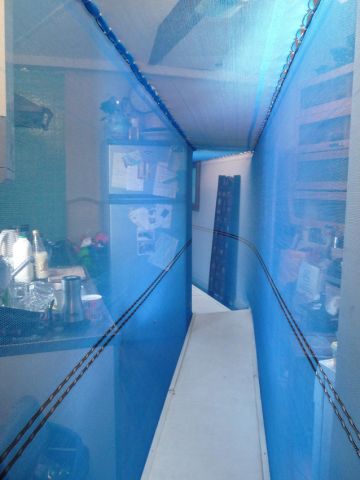 Fran Cottell’s latest house project ‘Back to Front’ is the fourth of a series started in 2001, in which she invites visitors into her house to witness and be part of its transformation from domestic space to a place for observing domesticity. In former installations she has built platforms which guide the visitors through the rooms where they can see the often chaotic domestic arrangements, the living rooms housing stuffed animals, ﻿barometers, musical instruments, and other collectibles which her husband brings home from auctions. There are the remnants of her children’s activities, meals eaten, diy jobs half started, along with family photographs, artworks and piles of books. Over the previous installations the platforms have been built at varying levels, one even puncturing the ceiling so the viewer climbed up and peered through into the upstairs.

This time the viewer is led through the front door and out to the back of this mid 19th Century house, built as a gatehouse to the adjoining former seaman’s cemetery. There is a clear corridor right through the house painted white, slightly raised and as wide as each doorway, with a blue scaffolding net on each side, and over head, as high as each doorway. It worked beautifully as a corridor through the not quite aligned rooms, with all the household detritus and essentials on either side, not quite visible unless you peered through. You are led through the study, then small hall, past a cupboard where the corridor narrows through to the sitting room, into the kitchen, and then a daughter’s bedroom, before finally being taken out of the back door. The household behind the net is as chaotic as usual, but this passageway felt like a metaphor for an idea pushed to its conclusion: a thought that has a will of its own and can cut through swathes of physical domestic demands and reach a satisfying end; a path through the mind too – all those interrupting thoughts put to one side as we focus on getting from the beginning of an idea and ruthlessly concentrate until its work is done. It is hard for a woman to do in a domestic environment, but Fran Cottell has done it brilliantly here.

An e-book by Fran Cottell documenting all her House projects (2001-2011); essay by Julie Bacon, will be published in 2012 by KT Press www.ktpress.co.uk