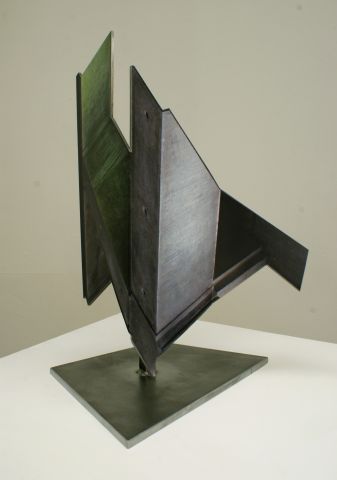 Fractured Living: Looking at the work of Neil Ayling and Frauke Dannert

Assumed traditions in artistic media are constantly being revised and revitalised. Two artists in recent exhibitions, solo show Flection by Neil Ayling at EB&Flow, and New Space featuring Frauke Dannert at B&N Gallery, challenge and expand the medium of photocollage.

Neil Ayling and Frauke Dannert both employ architectural photography in their work, and expand 2-dimensional imagery by incorporating it into 3-dimensional site-specific installations. They have the common reference point of Brutalist architecture, and its manifestation in the London context. Yet it is not only the use of the medium and subject matter that connects them, but the character of their work, which is dynamic and striking.

The organisation of imagery in Dannert’s 2-D photocollage work Fackel (2011) and Ayling’s photo fragments Mosaic 1-3 (2011), already evoke the sculptural without necessarily being sculptural in form; however, both artists choose to then push this further. In the act of taking a photograph a 2-dimensional image is made, ‘flattening’ the space of the architectural object being documented. Through incorporating the images into installation, the artists’ re-spatialise the object in a different setting.

In Emerald City (2011) and Kink (2011), Ayling applies a vinyl photograph print onto a surface of ‘folded’ steel. As the image takes the form of the steel sculpture, the elements within the photograph are re-configured in relation to one another. The ‘cut-out’ silhouette of the steel form produces a tension between the architectural elements of the photograph and the empty spaces in-between. Within this de-contextualised fragment, there is an ongoing tension between weight and void, and between image and object. The material of the sculptural form references the materials in the architectural image, bolstering the image content. In Prime (2011) this occurs on a larger scale, where the image, unlike traditionally displayed photographs, is visible from all angles; the viewer has new spatial relationship to it, being able to see it from both sides, walk around and re-orientate oneself towards it. Multiple scales and spaces are at work, with the relationship of sculptural form in the gallery space itself, and the images portraying another ‘false’ space within them

From Fackel (2011), a compact photocollage contained within a framed edge, Dannert then expands outside the traditional pictorial format to use layers of OHP projections in Untitled (2011). The layers of OHP transparencies create images that are fainter and more ethereal than the densely built-up cityscapes of the 2-D collages and the hard-edged floor piece Dazzle II (2011), and the means to display them more ephemeral.

In South Bank Graff Reconfigured (2011), Ayling cuts up and reassembles hoardings that have been left in public space and subject to graffiti, and incorporates it into the gallery itself in Creep (2011). His installation work extends into the moving image with L-Saber (2011), following a logical progression of experimentation with 2-D photography, a combination with 3-D elements and now with video projection, which scans across a large angular white sculptural form acting as a ‘blank canvas’ for the imagery. Towards a less literal use of architectural photography, Ayling uses more obscure imagery in Verge (2011), where rough black and white prints are incorporated more into the object surface, rather than being superimposed onto it. The end result looks like a modular component for a pre-fabricated structure subverted for a different purpose.

Contrary to the perception of architecture as being ‘static’ or ‘fixed’, in Dannert’s Fackel (2011) and Untitled (2011) fragments are re-formed to produce unstable, floating structures. Concrete and steel in Ayling’s work are made to seem light, dynamic and almost caught in movement; the compositions are angular and forceful, jutting from the ground, and twisting on an axis. There is ambivalence in the heaviness and groundedness of the materials and their associations, but seen in new, lightweight configurations. There something of the dystopian in both of their ominous, unpeopled landscapes, yet they maintain a liveliness that precludes pessimism.

The genre of Brutalist architecture continues to have pertinence, with its visible and definite presence in the British urban landscape. The London buildings featured in these works have an importance as a subject matter not only in terms of their wider social significance, but also a personal significance to both of the artists, having spent time studying in London and being immersed in its built environment (Ayling studying sculpture at RCA, Dannert taking MA Fine Art at Goldsmiths). Though manifesting the ideologies present at the time of their construction, the buildings are continually re-framed through the perspective of the present. With its many ideological associations, utopian town planning, its failure and subsequent social discontent, Brutalist architecture is a highly contested and potent ground for ideological de- and re-construction, enacted metaphorically in the artists’ physical de- and re-construction.

The work of both artists express the experience of the individual in the city, as a series of fragmented, disjointed experiences, where one gains only a partial and situated view of the built environment. Ayling and Dannert cut up, fracture and obscure architectural imagery in order to more accurately reflect the lived experience of (dis)orientation in the cityscape. This is evoked through 2-D photocollage, a combination with sculptural material, and an expansion into 3-D installation to re-gain a different sense of spatiality. Though it is not just the formal experimentation in their work that is of interest, it is the creation of a certain atmosphere, where the works have a presence, liveness and forcefulness to match its subject matter.

Sophie Hoyle is an artist and writer who lives and works in London.