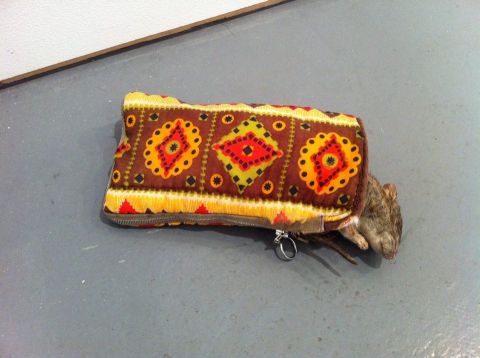 ‘I Could Be So Good For You’ isn’t sugar coated.

There’s no time for embellishment here. ’I Could Be So Good For You’ is far too real for that. These are not glorified, mystified artworks that exclude the spectator, nor is there a sense of separation between the stage and the auditorium.

You don’t have to spend longer than a minute in the space or even to consider anything past the physical material of the work to relate it to the physical present.It’s all somehow familiar, made from things that you might find in the attic or see on the way to the tube station. These are inclusive works, omitting any pretension that may intimidate or alienate an audience.

Dominic, from Luton’s ‘Antagonistic Relationship Aesthetics’, proclaims in the form of a banner that ‘WE HATE WATFORD’. The grubby paw prints load it with additional meaning that cements the work as something real, something representative of real life. These are not museum pieces. Life has gotten in the way here.

‘I could be so good for you’ is so raw and available. Art made from Argos Catalogues (Bermingham and Robinson ‘Autumn/Winter’) , to a taxidermy rat in a tiny sleeping bag (Dominic from Luton’s ‘ This Is Where It’s Rat’) conveying the many spectrums of urban life. The artists acknowledge mass-consumerism, destruction, boredom, poverty and the bits inbetween, works laced with humour and inevitable grisly overtones.

S Mark Gubb’s ‘’The World Needs More people Like You…Like The World…’, takes painting out of its traditional context and brings it a bit nearer, eliminating the sense of untouchable art. Done on what could be the tiles in my bathroom, even the title itself is just another brush stroke. The familiarity and realistic chaos enables the viewer to be distracted from the actual grim content, masking the harsh reality of the work.

My initial feeling was one of nostalgia. The press release is perfect saying ‘It harks back to a 1980s pre-internet, pre-Simon Cowell, pre-Cheryl, pre-Easyjet where hopping around Europe didn’t happen at the click of a mouse and the handing-over of a 3-digit security code. It’s when we were kids and all around us knew Britain that bit better but disliked it just as much as today.’ For me, ‘I Could Be So Good For You’ has a nostalgia that somehow recalls watching ‘ The Big Breakfast’, jam sandwiches and the scene where they follow the American into the toilet in “Trainspotting’. Maybe it’s because I was a child in that era that enables me to mentally place the exhibition in this more sheltered, even innocent decade when the world outside of England seemed much further away.

Yes, it makes sense the Margaret Thatcher references, even the framing and the quality of Dominic from Luton’s ‘’You’ll Be The Hero of The Neighbourhood’, takes me back to a time I’m not sure about. The paradoxically struggle of a semi-fond nostalgia.

However, in hindsight maybe we only indulge in nostalgia to avoid reality and what is really in front of us, hiding in the past as protection from an uncertain future and even present. Its easier to consider the past now that we know we can escape. But geographically and mentally, that past Watford is still there, Margaret Thatcher,those public toilets, that old harsh reality. Just because ‘I can hop around Europe at the click of a button’ doesn’t mean that what I leave behind actually goes anyway. Perhaps it’s easy to leave the past behind if we remove ourselves from it physically….

This exhibition attempts to unite me the spectator, the real person, with the reality that I am desperately trying to avoid, the reality that I do not want to see. This is getting off the bus and stepping on a ‘Hot and Tasty chicken box’. Bermingham and Robinson are right ‘The future is cancelled.’ This is the present.