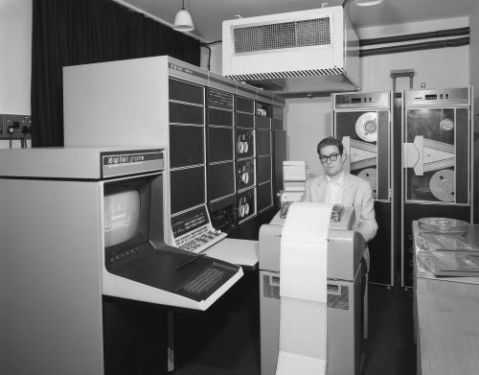 This exhibition looks at works that address the pervasion of managerial culture and how it has influenced life outside work, in education and at home, from the 70’s to the present day. It comes as no surprise that the same issues explored 40 years ago are revisited by artists over and over – the forms may differ slightly but the concerns endure. For such a political body of work, it is surprising that in times of unrest, society as a whole hasn’t looked into proposed other ways of working.

Of the nine works on show, there is one that invariably stands out. Perhaps due to the phenomenology of being a female writer, perhaps because the obviously dated film speaks of contemporary issues 40 years after it’s realisation, but I see Stuart Marshall’s Distinct as capturing and encompassing the exhibition in a nutshell.

I am appropriately sitting on an old comfy sofa watching an old TV set, where a couple – man and woman – discuss what at first appears to be everyday issues, in a setting resembling the set from Friends or an uncannily familiar TV living room. However, while still using the same words they suddenly start talking about something else. The politics of marriage, the conviviality, the power relationships between men & female, husband & wife, the everyday translated to a bigger arena. In a hilarious moment of despair, the woman blurts out: “we could talk about arseholes, like an aphorism talk about their black depth, everyone has an arsehole”, to which her husband gazes into space and doesn’t even bother to reply. Thus ensues an in-depth discussion of arseholes and appropriate things to talk about at the dinner table. The situation is repeated in a kind of Groundhog Day. They exchange roles, they try over and over again to say the unsayable and then suddenly in the ultimate act of self-parody, the camera zooms out and we see the filming set. The woman comes in again and tries for the umpteenth time to communicate with her husband:

“…if home work is a factory, then where are the products? This isn’t even a service industry!” These phrases seem all the more relevant at a time where women are still advocating for the non-division of labour at home vs. labour at the workplace and when governments are cleverly making use of the ambivalence of language by advocating the use of the word “occupation” instead of “work”. The issues are less successfully addressed by Eulalia’s prints of women in prison and doing home labour in Discriminacion de la Dona.

There is one more work, again a video, which I will talk about in order to give a better sense of this wonderfully curated exhibition. Co-Operative Explanatory Capabilites in Organisational Design and Personnel Management (2010) is a work by Pil & Galia Kollective that explores, with humorous poignancy, the affinity between work and ritual. I sit down to watch a slideshow of old black and white images of a company while listening to the uncanny narrative of a male voice. The juxtaposition of the images with the narrative voice describing the all-familiar workplace (it could be a parody of the comedy show The Office, or it could well be a true account of any online start-up work-life) force the viewer to doubt it’s veracity. There is something absurd about his description and yet it sounds so plausible that it’s hard to discredit this fictional account as we listen to the voice say “the cultivation of individuality to the point of personal eccentric idiosyncrasies resulted in more productivity from the workers”.

This is a brilliant critique of the corporations’ attempt to positively affect productivity in the workplace by merging (what an adequate word!) free time with work time. It is revealing to see the influence this supposedly has on the individual and I can’t stop thinking of the real conflating of life and work.

The division between work and life is discouraged in a corporate world where companies now manage not only our working day but also our aspirations and emotions. This extends to the field of education – schools are run like businesses: a space for continuous production of knowledge and culture, where children are seen as the raw material that will later assume their professional position within society. We have further blurred the distinction between student and employee.

As a whole, this is an extremely critical and overtly political exhibition. I only wish I had more space to talk about it. Until recently, it seemed that contemporary art was more concerned with its self-justification than with its role in a social and political realm and this was a direct by-product of post-modernist thought. Hopefully as we move away from it (into the hypermodern or beyond), artists will revisit these issues. It is time we became political again. 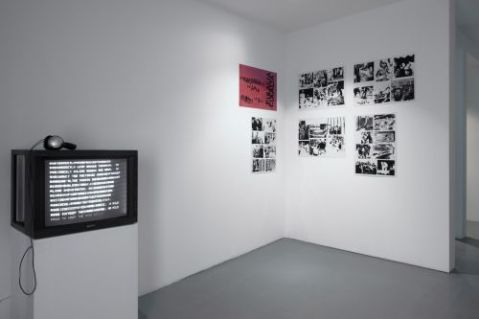