Circa 1960 - a-n The Artists Information Company 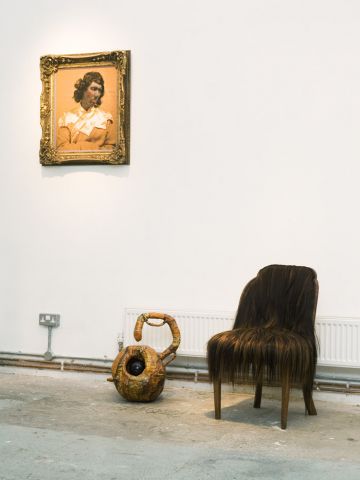 What is Circa 1960? Upon entering Guest Projects space you are confronted with Mark Selby’s No Need to Shout, a top heavy structure with a large red PVC trumpet shape (reminiscent of Kapoor’s Marsyus) leaning towards you. The main structure is made from Meccano-esque steel and stands about eight feet tall.

To the left there is a pile of handouts on a chair. It tells you that:

Circa 1960 fits aptly with Guest Projects’ ethos: the artists are guests, invited in to create a project of which the exhibition was just one small part. Examining failed ideologies of Modernism; we must view this project as a whole, as mocking the ambition of the Modernist project. The sheer scale of ambition in the project smacks of this and it is for this reason that I will turn my attention to the satellite events that occurred during the build up to the exhibition. There are clues that the artists may not be taking this too seriously here. Events included a Danceathon by Hey Baby Chief Panda – which was a competition where the winner is the last person dancing, and (so I am reliably told) a parody performance of a Careers Centre by Jimmy Merris – where instead of delivering careers advice the performer tried to give the customer whisky, and stared them for long periods while a man named “Paul” talked about his own work. The story of the Careers Centre struck me because my wife works in the careers department of a London university. University careers centres have long since abandoned actually giving careers advice – Christ no! They might get sued. Also, more liberal teaching philosophy underpins their decision to act more like counsellors. Instead of making suggestions they ask questions like, “What do you want to do?” and “How do you think you can achieve that?” – the aim is for the individual to realise, for them selves what they need to do to achieve their aims. Very well you might think but due to cut backs even this service has been retracted and this major UK university now offers no face to face careers service to students – it’s cheaper to print such questions on a help card, or better still “develop online resources”. This got me thinking; in the context of failed ideologies the university is right up there. Governments have bent university education to conform to vocational needs; it’s all about employability. They have done this by forcing the cost of education onto the recipient. This has two effects. Firstly the recipient takes a financial risk, and is re-assured that they will be well remunerated over a lifetime as a graduate. Secondly, a covert message is sent out that higher education has no benefit except for the recipient, therefore they should pay for it – there is no benefit to society as a whole (who needs doctors, teachers, artists anyway?) so why should society pay? Additionally this makes the student arse-kiss lecturers as they worry about grades and references and how this will affect future job prospects. Saddled with a huge debt the student runs to the careers centre for re-assurance that it’ll be worth it and advice on how to achieve their goals – only to be told that they need to figure it out for themselves – there is no help (unless you want to pay for it privately of course). Anyway, most industries operate on healthy nepotism and you can always “network” by doing years of unpaid internships. In this context a drunken, selfish and unhelpful careers advisor is not a far-fetched as it may seem. The performance comments on university life and the struggles that will follow after graduation.

John Walter tackled the failure of Modernism through a performance exploring the break up of couples, using home made theatre costumes reminiscent of Picasso’s Parade which in turn dealt with the horrors of the First World War through a Dada-esque ballet – as if the only way to respond to the realisation that the Modern world of industrialisation has just collapsed into mechanised slaughter, that all that the machine promised us in terms of helping society and lessening workloads has been reversed by taking away jobs and taking away lives, the only way to respond to this is through absurdity. This reminded

me of the Gaddafi quote “If the world is crazy, we will be crazy too”. Perhaps Circa 1960 isn’t just about failed Modernism in the 60s, but a response to the absurd and frightening debt ridden situation we find ourselves in today.

Karen Tang’s wall based sculptures are inspired by science fiction. A Mass of Crystalline Tissue is inspired by a JG Ballard quote both in its form and content – the content being a distorted image of the magazine cover in which the quote first appeared. The work goes one step further by crystals set into resin to make the work a literal interpretation of the quote as well as a meditation on the Ballard story. This piece is typical of Tang’s sculptures in this show. Decision Cave, however, is visually different to the rest of her work. For a start it looks much more organic, evoking the craftsmanship of tribal communities and shamanistic practices that you could associate with such an object. Decision Cave differs from the other works in that it could be an actual object from a sci-fi story whereas the other sculptures appear more as interpretations. At the centre of Decision Cave is a toy called a Magic Eight Ball which you use to answer questions. Its answers can be enigmatic, like the oracle at Delphi. When I visited the show the words of wisdom were “Outlook so so”. I don’t know if this changed throughout the show.

Handbags play a surprising role in the show. Adrian Lee’s Beuys/Vuitton Remade is a Louis Vuitton handbag stuffed with fat and with felt patched on the outside. I’m not aware of the original Beuys piece but assume that it did exist as with Portrait of the Artist as Tretchikoff’s Blue Lady Lee draws our attention to the reproducible. It is said that the Blue Lady (as confusingly known as The Green Girl and the Chinese Girl) has been reproduced more widely than the Mona Lisa. It also revokes the old high-art low-art debate especially when artists in the 1990s started to cite him as a precursor to their ironic postmodern style. Perhaps it is this play on “commodity” that points us towards the other handbag in the show, which makes up part of Corinne Felgate’s The Lady’s Not For Turning, a bewildering series of sandpaper plinths with objects placed on them in a manner not dissimilar to designer shop window displays, but this time the handbag is made of clear resin encasing various types of salami with a chicken foot, adorned with nail polish, perched on top. Another work by Felgate, Hair Brush, seems to be a straightforward joke – the bristles of the brush as replaced with the artist’s childhood hair. But then you are confronted with Exponential Growth, a chair entirely covered in hair – “cousin It” style, which is funny, until you read the materials “Brazilian Human Hair and Wood”, then it becomes disturbing. Where did she get so much Brazilian hair? Probably from a Brazilian hairdressers, but you begin to wonder if it’s available online – anything can be a commodity now we have the Internet. Perhaps the display of The Lady’s Not For Turning is intended to refer to commodities and in the context of Circa 1960 we are reminded of the end of rationing and the rise of luxury goods. Earlier work such as Austerity Measures (a Chanel handbag hand made from a paper bag with gold leaf, marker pen and gaffa tape) appears to confirm the link.

I made a visit to the project space on the 12th January and met three of the artists. Alastair Levy has a practice rooted in 60s Minimalism. He feels that the last hundred years has freed people to work in any way they want in a kind of pick and mix culture, taking from previous styles. In his case Minimalism and Conceptualism are raided. Levy has a series of differing works in the space. A painting about the everyday was made by stretching an old tablecloth over a frame. The tablecloth has been used as a shower curtain for sometime and had recorded the marks of a daily activity in the form of stains. A C.D. perched on a windowsill was another artwork. It was exactly half filled with data. This links with another work Box Set (featured in the exhibition) where all the paints from a Daley Rowley box set were mixed together to make a bistre-brown which he used to cover a canvas. Both works are about middle points. But Levy also had an ashtray on the floor with a half smoked cigarette made from grass taken from the pitch at White Hart Lane, and in other works he stages reconstructions of EBay photographs. For Levy failed modernism means he can do what he wants.

Luke Ottridge was half way through his residency when we met. His installation seems to me to be very much in the spirit of mocking Modernism’s grandeur and I was pleased to see Event Horizon make the exhibition. The centrepiece of the installation is a copy of a plaster bone from Texas, which in turn was a copy of a destroyed bone from about 100 years ago. There is a creationist myth attached to the story which supposes that this is evidence that angels walked the earth. There is also doubt as to whether the original bone ever existed. The bone sits on a circular “black hole” and is surrounded by the only 3D shapes which are symmetrical. These refer to Platonic ideals and their copies (referring back to the bone as a copy). Also around the whole are a series of TV monitors depicting a blind man walking or stumbling about. Ottridge speaks about the circular composition as a tool to echo religious cults and in turn he sees the failure of the promises made by utopian 1950s gurus as unfulfilled; coming to an end with the Charles Manson murders.

The third artist I met was Mark Selby, who was yet to undertake his week-long residency. The only outcomes of his that I saw were those in the exhibition. Where the unlikely balance of No Need to Shout confronts and has a comic feel to it (like Hong Kong Fuey jumping out of a filing cabinet) Selby’s other work, Better Half, is different. Better Half is a tidy piece of conceptual sculpture in the form of a chair (no hair on this one), half made in plywood and half Perspex. Selby challenges us to judge which is the better half. Both halves are made with the industrial precision of a Donald Judd so there are no clues in the making to give away Selby’s own position. The naturalistic wood could be seen as nature re-capturing the (failed) Modernist chair, like ivy growing over a house. Or the Perspex could be seen as a triumphant prosthetic enhancing the wooden structure, like a cyborg. Better Half works well as a seat of contemplation in the exhibition, encouraging us to reflect on all of the works both individually and as a collective.