Out of the Cosmic Storm - a-n The Artists Information Company 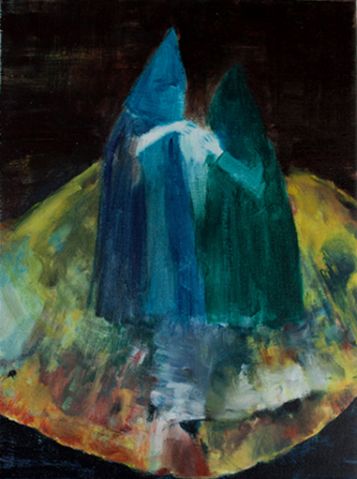 There are occult forces at work in Lindsey Bull’s paintings, for Bull is a painter concerned with the traditions and practice of witchcraft and magic: belief-systems that sit somewhat uncomfortably in our modern age, dominated by technology and the prescriptiveness of science. Specifically it is the ceremony and ritual of these secret histories/societies that are the focus of these small cimmerian canvases, where robed figures gather in small groups in darkened rooms – spaces readied for ritual.

In Out of the Cosmic Storm, the picture that gives the exhibition its name, we are the unseen onlooker at a magical working. Two figures in pointed cowls meet in a Baconic enclosure, which we may understand as the protective area of the magic circle: a space where strange energies may be conjured but perhaps not always safely dispelled. They are engaged in an act of spirit-sumonance, their hands upon the ‘shrew-stone’ (a device of polished obsidian such as that used by John Dee), glowingly active in mid-reception. We can only guess at the requests being made of ‘the other side’, the other-worldly noises being raised; the crashes and bangs of a malevolent, newly disturbed spirit perhaps, or the sad wails of some trapped ghost. Less enveloped in darkness is Wise Witch, a white-robed wiccan emerging from a celestial softness, her face seemingly with us and without us as though listening for a call from some mysterious frequency; the white light behind her opening up: a gateway out of this world and onto some other plane. But whether she is an earth-bound high priestess or some glimmering elemental is left unanswered. Similarly indistinct is Accretion, in which we appear to be looking upon a strange pale figure emitting a golden light kneeling in a rose-orange prayer-space, flanked by robed attendants. Are the trio in homage to some unseen leader, or object of worship? Or are we witness to three dabblers in private, drugged communion? In Origins the witches sabbath is in full (drug-induced?) flow: the coven bowing to some tall supernatural visitor. But is the glowing interior of the magic circle an astral vision of flaming coals or the chemically enhanced persian carpet of a suburban sitting room?

All is not what it seems, and the scenarios presented are, seemingly, the results of altered states of consciousness where the ordinary barriers between the real and the invented/imagined are either blurred or done away with entirely. This work does seem infused with chemical assistance but drugs have always fuelled the world of magic and the supernatural, from the witches of the dark ages who convinced themselves they had flown at delirious cackling speeds over rooftops, having anointed their bodies with animal fats laden with hallucinogens, to Aleister Crowley’s heroin habit that required daily doses so massive a single injection would have killed a novice. That the work merges occult mystery with psychedelia is key, for occult interest exploded with flower-power (although as Gary Lachman has commented there were many dark blooms in the summer of love), and in this way the work straddles time also, evoking both the late 19th Century magical elitisms of the Golden Dawn and the beads and bells of Alex and Maxine Sanders, the hip witches of 1960’s Notting Hill.

Bull’s practice is, by her own admission, ‘an exploration of reality and illusion‘, and in these paintings what is and what may not be real becomes a constant, shifting question for the viewer. The work hits upon the same vein found in Rosemary’s Baby (the tinkling piano theme is perhaps its soundtrack), particularly the scene where Mia Farrow is drugged and the coven’s faces twist and distort around her as the chemicals pull at her consciousness. Likewise, these paintings move in and out of not only what we know to be sane and true, but also those other (un)realities that may be reached, intentionally or otherwise, with the aid of drugs, the imagination, or simply out of a need to believe in the other.