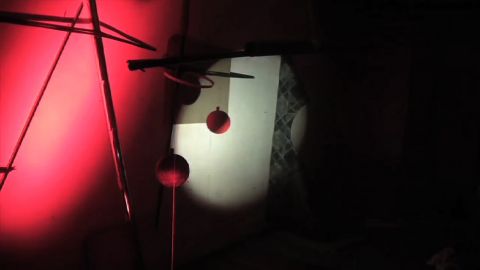 Despite showing the work of three individual artists, the current exhibition at Oriel Davies Gallery, offers an array of installations that all complement each other by raising questions of perception, context, and meaning. Sibyl Montague uses found objects to create unusual sculptural amalgamations, and the gallery has also commissioned a new work by the artist, which is a video to accompany the physical works. The two work together and create the sense of a performance in which the objects have strayed from their conventional meaning. In Montague’s work there is certainly a theme of the temporary and, certainly in the video, the rhythmic. This ties in nicely with Pia Borg’s work, which in this exhibition comprises several short film installations, all of which seem to play with the rhythmic nature of time and movement. There is some beautiful and haunting imagery in her work, especially within ‘The Crystal World’ (2012). Borg’s work, like Montague’s, seems to want to change our perception of time, and juxtaposes the animate and inanimate. The third and final artist in this exhibition, Sean Vicary, changes the focus of specific natural objects, presenting them as enlarged and sentient. Film’s ability to both speed up and slow down time is certainly a factor which seems to be at play in all these artists’pieces, as well as perhaps the preservation of memory. All of the work for this exhibition is brilliantly thought-provoking and certainly makes the viewer question their perception of what is real and what is mediated.

Sibyl Montague is an Irish artist currently living in London, and this is her first solo exhibition. ‘Arm Around You’ offers a collection of sculptures made from everyday found materials, all of which are brought to life with movement and lighting. Montague’s aim with these pieces is to free such familiar materials from normal association, and give them new meaning and purpose by becoming temporary props in a performance. The physical sculptures here are an extension of the video installation that the artist has produced for the exhibition. This short film consists of the objects ‘performing,’ and seeming to move independently in a backdrop of flickering lights and unsettling sounds. All of Montague’s work here nods to the temporary; these objects have come together by chance and met with a contradictory context, they are not presenting any permanency. The cylindrical, spherical and circular pieces within the sculptures suggest the possibility of movement, as do others which indicate flight or climbing, however all of the pieces are stationary; movement has been frozen in time.

As aforementioned, ‘The Crystal World’ is a film installation by Australian artist Pia Borg, and is also the name of her exhibition here. This video installation includes imagery of cloudy waters and floating hair from Laughton’s 1955 film ‘The night of the Hunter,’ and above all shows the crystallisation of liquid, indicating the freezing of movement and time. These crystals halt the movement of contraptions such as wheels and cars, questioning the power of the natural over the manmade. Borg’s other film installations here such as Palimpsest (2009) and Footnote (2004) all play with the concept of time and create anxiety in the viewer with such sounds as the ticking of a metronome or the whirring of a machine. Like in Montague’s film, rhythm plays a big part in indicating a passing of time, and some kind of repetitive performance. ‘The Automaton’ (2008) includes many clocks, cogs and turning mechanisms indicative of the monotonous rhythm of life; the inclusion of the bed as a prop also suggests routine time spent between life and death. Pias Borg’s work shows us how animate objects can seem inanimate when captured on film, and vice versa, making them seem distanced and even false. By using the medium of film, Borg has been able the blur several time frames into one, whilst also suspending movement and memory into a kind of film crystal.

In Sean Vicary’s work ‘Lament’ (2012), natural objects and animals seem to sit in their correct context yet at the same time appear completely independent of the landscape. This animation of usually inanimate objects brings to light a detached sense of belonging in one’s surroundings. The rhythmic movements of the leaves, shells, pines cones and other objects seem indicative of invisible process at work behind the piece, and these altered portrayals make the viewer construct a new personal meaning, something which is certainly true of all the aforementioned pieces on show here. The audio-visual relationship in Vicary’s ‘Lament’ suggest a kind of ritual, complemented by the hints of poetry and particularly the imagery of spinning frogs that appear to dance in a circle. As an extension of his exhibition, Sean Vicary has implemented related imagery through GPS positioning, available to view on a mobile platform. This work is wonderfully innovative and certainly indicative of our quickly advancing digital world. Through a smartphone, viewers are able to see floating leaves from Vicary’s film installation, appearing as part of the immediate landscape but invisible outside of the device’s screen.

These three exhibitions at Oriel Davies have been cleverly curated to thematically weave in perfectly with one another. The work of all the artists showing here portray an exploration of time, rhythm, landscape and various juxtapositions transferred from life into film. Each piece encourages the viewer to adopt an altered perception of what is real and what is fictional, questioning accepted meanings and contexts. By using the medium of film, each artist has allowed themselves to play with time, movement and stillness, creating internal landscapes which are both permanent and temporary. 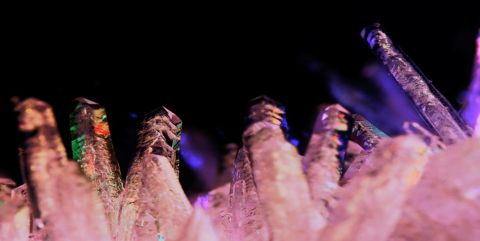