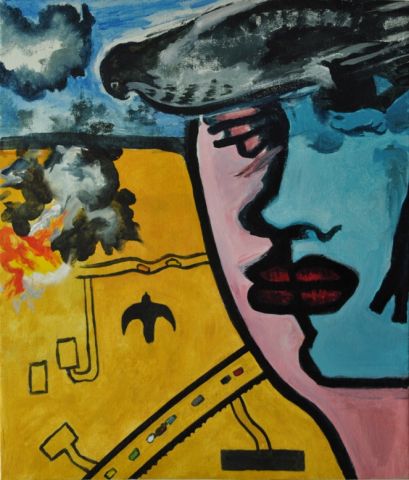 Mike Holcroft’s recent paintings retain the keen observation and careful composition of his ‘Flowers’ series. But the work has moved from observation of nature to a thorough and courageous exploration of the world as observed through his inner senses. As a result, it has a freshness that communicates directly from gut to gut.

The process of developing the work started with his installation of monochrome charcoal drawings presented as part of Water Street’s ‘Just in Case’ winter show. Throughout the seventy drawings in the installation, a number of themes emerged from the charcoal-mist, including birds (lots of them), hermits, and gazing women. I visited Mike today in his light-filled studio in Todmorden, and after I’d negotiated the worn stone steps up into his space, I was rewarded with a feast of colour. The monochrome drawings have served as a starting point for a number of explorations of form and colour, diligently and energetically realised. Doves now fly in magenta skies, mirrored in the eye of an old man, who lies beneath. It’s not clear in many of these works who is watching who.

But in most of them, someone is watching. These are alert paintings of a keen observation of the artist’s environment – geographical, social, political and psychological. Eyes are a recurring theme – from those that fill our field of vision as they watch the crows, who look hungrily back; to the limpid gaze of the landscape-women whose curving dark eyelashes echo the feathered curve of the wing of the crow. The crow occurs repeatedly in these paintings, an archetypal symbol of the unconscious eye, and a frequent inspiration to Northern artists (Ted Hughes springs to mind). The eye of the crow mirrors the world.

Another bird that makes a showing is the hawk, also watching keenly. In ‘Hawks with Onlooker’, the hawk watches itself, melded with a woman who it seems has found her feet, no longer lounging in the landscape. The ochre streets below explode in a riot of colour, a fire, a riot. These are paintings in, of, and from our time. The style nods to Picasso, and the joy of simply realising form through the medium of paint without constraint.

Mike Holcroft has kicked away the crutches of his classical art training and returned to look for something else. The results are dizzying. Particularly the vertiginous ‘woman falling’. A woman tumbles, suspended in the immediacy of paint. Time stands still. Some things will never heal. Her nudity reveals the vulnerability of all of us in the face of the fall of so many structures that we thought kept us on our feet. A snake-like form wriggles through the grid of a structure on the left, echoing the ochre road that curves below. Perhaps a reference to the original biblical ‘fall’, it mimics almost perfectly the curvature of the woman’s form. In the quieter right hand side of the painting, she floats peacefully above the blue, almost as if she were simply diving into one of Hockney’s perfect pools. But this, the angry rendering of the brush strokes will simply not allow.

Carole Kirk is an artist/researcher currently working at the University of Leeds, and based in Hebden Bridge, West Yorkshire.