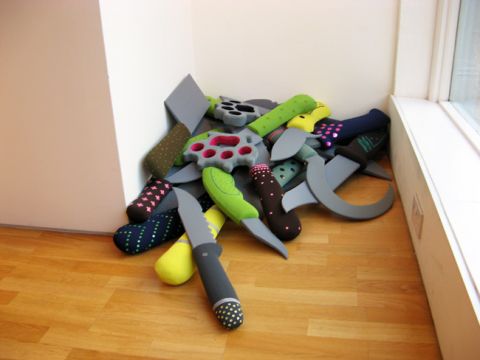 Unlike those hapless press releases so mercilessly dissected by Bank’s Fax-Back project (when the art collective remedied grammatical howlers, highlighted gallerist’s overblown claims and deflated theoretical hot air) the text for ‘Pretty Disastrous’, an exhibition at James Freeman Gallery, is refreshingly direct and entirely apposite: ‘Walking into a Craig Fisher installation,’ it says, ‘is like stepping into a cartoon film set, only to find that the plot has turned decidedly sinister.’

For a start there is the installation’s colour palette: its pinks and reds and blues suggest the visual language of teatime kids’ TV animations, but upon closer investigation matters are found to be much more disquieting. There are, for example, the decorative motifs spanning walls and drawings, which appear to be mere pattern but are in fact renderings of ominous chainlink fences and vicious razorwire, whilst the cutesy billowing clouds in one picture turn out to be the explosive blast from the failed Challenger Space Shuttle… The gallery is also stuffed with comically overscale weapons: a huge axe, a knuckleduster and countless knives are rendered carefully in fabric and embellished with stitch and sequins; meanwhile, a bloodstain (represented in glossy lycra stretched tight over foam padding) displays its sticky meniscus on a panel in the front window. All is clearly not well.

Several of the works are explicitly the result of some destructive incident, as evinced by titles such as ‘Disastrous Situations (Wreckage)’, ‘Debris (Rubble)’ and ‘Bloodbath’. Smashed planks – made in fact from fabric-covered neoprene with embroidered-on wood grain – are propped against one corner of the gallery, and what purport to be sheets of lined paper – crafted from white linen and blue thread – are scattered across the floor. In my mind’s eye I see the televised aftermath of terrorist bombs when splintered furniture litters the streets and a morbid ticker tape of office papers drifts silently down…

It’s obvious that ‘Pretty Disastrous’ is in thrall to imagery from the breadth of visual culture. The show resonates with depictions familiar from actual news broadcasts and fictional Hollywood productions as well as referencing Western culture’s attachment to the classical architectural ruin: destruction has long exercised an aesthetic and emotional fascination. Fisher recognizes the joyful Dionysian urge that sees us enjoying explosive big-budget film or cartoonish gangsta aggression, but holds this in tension with a bleaker recognition of the way actual violence threads through contemporary life.

The works make much of the idea of surface: the pink and red walls become a kind of theatrical backdrop, and several drawings are cut away to reveal a layer of depthless colour beneath. As I pick my way through the installation I’m alert to distinct agglomerations of objects and images, which rub up promiscuously against one another: there’s a disaster zone of wrecked buildings, the collection of mutant weaponry, and a recurrent obsession with the carceral role of big walls and high fencing… Each aspect here – simultaneously comic strip and disturbing reality – stages the sort of psychodrama through which our more violent fantasies may be confronted and explored.