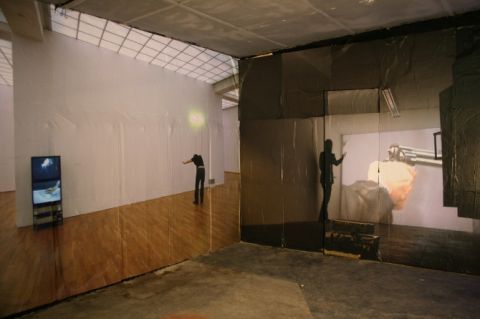 Venue
Over + Out
Location
East Midlands

Crocodiles with a Second Skin Thrash is a curated exhibition by artists Andrew Bracey and Kate Buckley hosted in one of Lincoln’s newest art spaces Over + Out. The exhibition is described as being curated by observing the re-use of existing material within an artistic practice. In essence a core of the exhibition looks at the balance between different artistic practices and how one artists work can through a slight shift become that of another.

Although the exhibitions purpose is to curate around its theme, it also takes direction from the space that houses the exhibition. Over + Out is led by artists Dale Fearnley and Laura Mahoney who describe the space as anti white cube. The notion of anti white cube comes from the rough and ready feel the space inhabits, once used as a sex chamber the space has since been painted black and now in my opinion takes its lead from theatre encompassing the essence of a rudimentary black box where scenes and indeed exhibitions can be played out, here the perfection and precision of traditional gallery spaces are left at the door.

Bracey and Buckley have inhabited Over + Out far more successfully then previous exhibitions presented in the space. They have taken the structure of the gallery and played with it, incorporating practicalities and comfort. Playing to the strengths of the space the curators have decided to utilise what is available instead of hiding what is not. The exhibition doesn’t attempt in any way to use the space like a white cube which other exhibitions perhaps have, instead they have bought in seating and created an exhibition that fits comfortably into the space, bordering on homely.

The exhibition really begins in the main gallery space, no bigger than a large living room, although there are works on the periphery. Toby Huddlestone’s work is the first seen in the space after coming through the living room door, and just like wallpaper it wraps the walls and changes the gallery’s interior completely. Huddlestone’s work from the series Actions in Galleries shows the artist interacting with pieces of work in other galleries. Here we see Huddlestone swearing at a work by Roman Singer, one of many actions he has undertaken with other artists work all of which contain an over riding sense of humour as Huddlestone undertakes an action that at some point we have perhaps all wanted to do whilst left alone with someone else’s work. Whilst swearing at Singer’s work Huddlestone is able to become a part of the projection as his swearing figures become a shadow adding an intentional double narrative to an existing work that through this action becomes Huddlestone’s and is presented as a capturing of one moment in time on the walls of a space far away from the original. This double narrative plays well with the curating of the space as it inserts its authority on the otherwise blackened interior, dominating but with consideration.

Closely matched to Huddlestone’s work is Andrew Bracey’s, taking off his curatorial hat Bracey’s work sits silently in the oddly placed seating arrangement in the centre of the main exhibition space. Amongst the jumble of chairs and pieces of paper Bracey’s work is found in the format of a book. The book as an object initially appears slight when compared to the rest of the work in show but becomes acknowledged when considering the seating area is largely placed for the consumption of this work, giving it unlike the other works a dedicated area for contemplation. Bracey’s book contains a series of self portraits taken through the reflection of other artworks, akin to taking a self portrait whilst looking in the mirror, but instead of the portrait being the main subject matter here the artwork and its onlooker become the focus. At times the portrait is taken in such a way that it appears to be the work itself placing like Huddlestone’s work a double narrative. It seems some what cheeky to be borrowing other people work to have as your own, but when expressing this statement it is abundantly obvious that artists have been doing this throughout history only their borrowing has been more subtle. If anything these works only appear cheeky because they are making the connection of borrowing blatant and feel no real reason to hide this, thus making the work far more frank and perhaps honest.

Just off the main exhibition space is a smaller room evidently ironically painted white, which I am told is the VIP room or mock white cube. Having this connotation before entering the space makes me feel a little un-easy as I wander if the continual reference to the white cube is wearing a little thin. The space contains work by Fiona Curran, Peter Lamb, David Osbaldeston, Aislinn Ritchie and Emily Speed. An off kilter collaboration forms the central work to this space where works by Peter Lamb and Aislinn Ritchie come together. Ritchie took Peter Lamb’s work as the base for creating her animation and installation. Her work essentially animates that of Lamb’s, turning a collage of found material and paint into an animation and extended installation paper trail between her work and his. Her reinterpretation references psychedelia and childhood ticks using her observations of the work to create a new reading. An odd double take occurs in the space when looking between the two works which makes it hard to see where one work begins and the other ends, a metaphor for the exhibition as a whole. I am relived to see Ritchie’s work in the VIP room and the connections she has made to Lamb’s work, it takes the edge off what could have been thought of as a space of elitism where some of the more precious works of better known artists are housed which looses its irony quite quickly. I am informed afterwards that part of this curatorial decision lay in the practicalities of the space; suffice to say the room was in fact the only space in the gallery that could be guaranteed not to have a leak in the ceiling. This very practical consideration perhaps only highlights the difference of works in the show, the works that have value and those that are more temporal.

David Osbaldeston’s work like Bracey’s sits quite silently in the space its simplicity reverberates in the lightness of the fresh paint. A simple pencil drawing of what appears to be an artefact from Peter Doig’s show at Victoria Miro titled 100 Years Ago. It’s a work that confuses me, I am unsure where the fiction and the fact lie, having not seen publicity for the Doig show I am unsure if this work is a direct copy or re-appropriation of what looks like publicity material, perhaps it doesn’t matter. The work acts as a gesture, the re-using of information to create another end or part. Osbaldeston’s work acts as a summary it concludes the exhibition and acts as a footnote, a clarification, it states not only its own purposes but also that of the curators.

The show as a whole investigates an interesting subject matter the borrowing, re-interpreting and general investigation of other artists work for the production of new pieces, it highlights what is very readily taking place but rarely acknowledged. It also seems apt for the exhibition to happen in a space with so many layers of information, some a part of the buildings history and some given to the space by its curatorial owners. Although the exhibition explored an interesting sentiment there were a few curatorial decisions that were perhaps questionable although not detrimental, such as the separation of spaces. If we really consider the historical rational behind the white cube we see the logic and understanding of how such spaces came to be as appropriate places to show art and let the work have space to be understood. It is then quite understandable that the exhibition came in two halves, that of the white walls and that of the black, one with atmosphere and one with clarity. I cant help but leave the exhibition wandering what it would be like if presented in another space, if it would retain its double sided approach, undoubtedly the work would, but what decisions would the curators then make to keep the curating appropriate to the content, when decisions in this space seem to have naturally and appropriately occurred.