OUT OF BALANCE - a-n The Artists Information Company 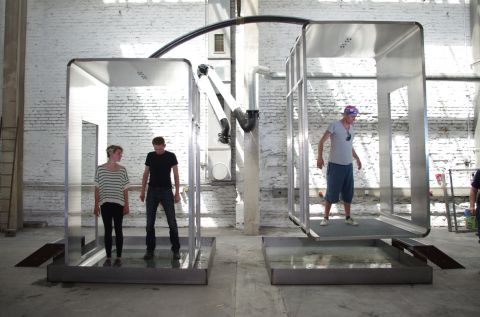 There are two principal cities for artists in the European part of the world now: London and Berlin. No others come close to matching these cities for their vigour: their astounding historic collections counterpointed by contemporary verve.

A recent trip to Berlin was organised around visiting the first major solo show of an emerging Berlin based artist, Jenny Brockmann. Brockmann is a sculptor on a large scale, working directly with stone and metal. This solo show, Out of Balance, explores the idea of balance or equilibrium through a series of works spread through different parts of the Galerie Gerken space.

At the beginning of the exhibition, in the main gallery space the visitor is confronted by a gigantic aluminium construction, which he or she might enter if they wish. Two containers (H280 cm x W160 cm x D160 cm) are suspended in the air, connected via a tube affixed to the ceiling, and hover above two rectangular pools of water. You can only step into one of the containers at a time: but if you do, it will immediately sink into the pool, immersing your feet in the water. Unless someone else steps on at the same time; then you must struggle to maintain a balance, above the water. Each is therefore put into an interdependent relationship with one another, each bearing responsibility for keeping themself and the other dry.

The water here is both a real danger: materially, only to one’s shoes, but symbolically, water represents a force that is both life and death, eros and thanatos. We have a complex relationship with water: the human body is 70% water, we cannot live for long without water, yet we cannot live in the water: we will die if it gets into our lungs. We begin our existence immersed in water, then spend the rest of our lives recognizant of the danger of immersion.

Brockmann’s giant balance therefore presents to us the idea of equilibrium as something based on interdependence. We all share the same danger if we get out of balance. At the same time, the cool metal shapes are polished to a subtle sheen that is almost soft; though welded of metal, this set of scales is poetic, not brutal. An object of contemplation and beauty, as well as playfulness, that one can experience from the inside.

One visitor to the show remarked that the giant scale recalled for him the ducking-stools used in witch trials. And the notion of balance as justice. Yet here Brockmann makes it very clear that “balance” is something we have to take responsibility for.

Upstairs, Brockmann presents a number of smaller sculptures that deal with the equilibrium of elements in a different way. Bringing together natural elements such as stone, wood and glass, with mechanical forms such as machine parts, and arranging them together into new forms, she creates objects as balanced as haiku – seemingly ready to shatter or spring apart, yet at the same time material and solid. The sculptures’ constituent parts seem to hover around each other yet are firmly one.

Animated video loops accompany the smaller works on the upper level of the gallery, presenting yet another idea of balance: that of perpetual motion.

In the gallery’s garden area Brockmann presents stone work. This too is kinetic. A large stone formed to a peak lies with its flat bottom upon a smaller rock, which in turn is placed upon an air-cushion. The stone was quarried in the region near Dresden, and is a kind of granite, very hard and difficult, but worked into a shape and texture of great beauty: one side of it remaining raw, the other polished.

While the activity of the scales in the first installation is dependent on human action, the subtle rising and lowering of the stones via the pneumatic system they rest upon is dependent upon the outdoor air temperature. As the temperature changes during the course of the day, the pressure in the air-cushion changes and causes the stones to move, as though they were slowly breathing.

Brockmann’s work is playful and fun to experience, yet does not ever soften the impact of the philosophical and self-questioning issues that the work raises. It manages to deal with heavy subjects with a lightness of touch. As an artist whose chief materials are simply the four elements – air, earth, fire and water – she is guided by a deep and constant understanding and appreciation of those very elements. All four in balance.

Unlike many artists working in the capital today, Jenny Brockmann is actually a native of Berlin. She was born there and, apart from some years living in Italy, has remained there. Her work is among many other things, as an emanation from her deep connection to the city its façades, materials, culture. She is less concerned with the thrills of its recent history than with the raw material of which it is made: stone and earth and metal. Industry and culture. The work is personal and universal. Brockmann, unlike so many contemporary sculptors, makes her works by hand, piece by piece, bit by bit. Shaving fragments off stone; shaping metal through infernal heat; forcing unmarriageable materials such as wood and metal and stone together into balances delicate and ethereal.