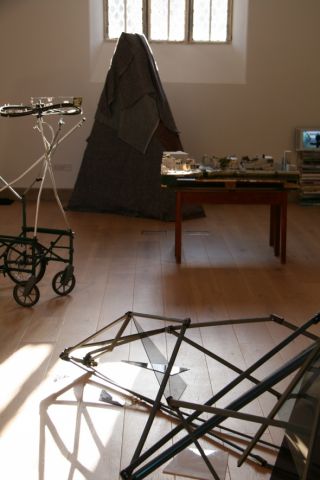 Is there anything more scary, when organising an exhibition, than not knowing what the work will be until it arrives for installation?

OSR Projects put themselves in exactly this situation for Everything & More, which marked the end of the transitional group’s first year. But judging by the sense of energy and reciprocity exuding from objects in the room, as well as the buzz from closing party visitors, it can unlock possibilities that might have been crushed by attempting to pre-define the exhibition’s shape.

OSR’s Simon Lee Dicker invited two artists to contribute to a show about work in progress; the unseen studio experiments that might be pivotal developments as much as doodles and discarded ideas. Each artist invited another, and so on, creating a chain of conceptual affinities which made for a tight coherent show by any standards, particularly considering that some of the artists knew nothing more of each other than the blog through which they had shared some ideas. It sat within the context of Somerset Art Week like a cuckoo in the nest of the ‘Open Studios’ concept as a platform for selling artistic product.

Harry Lawson’s assemblages featured the emblematic image of the Twin Towers: as an uncannily doubled monolith floating Tardis-like through the galaxy, or dwarfing pyramids on a lenticular postcard flanked by palm plants. The towers have become like a mathematical symbol – a vertical ‘equals’ sign shorthand for a plethora of 21st century agendas and relationships. Lawson’s wobbly hand drawn enlargements of technical graph paper hinted at the difficulty of approaching such icons through art, and contrasted his faded print outs from the BBC website’s first coverage of 9/11.

Megan Calver’s canoodling walking sticks stood proud in front of the BBC reports, as if fixed there by a snake charmer. Their mutual support couldn’t help but relate them to the human context of the drama described above, even though they could equally well have just been a sight gag. Either side of them was a section of rubber matting, lest they should part company.

Talking of sticks, another dual register of tragedy emerged in Sue Palmer’s video pieces. ‘The invigilators looked after the sticks’ recorded a competent performance on Angus Fairhurst’s drum kit in a deserted gallery. (The TV monitor was propped on a pile of books – was it an accident that the top title was ‘Apocalypse’?) ‘Succession’, squintily projected in a cupboard full of rhomboid sheet materials, described the death of a blackbird flying into a window, through a slide show of text and a shiny red drop on stone.

Across the room, Gabriel Stones’ photocopy of a folded letter, ‘Last Thoughts’, was an apparent suicide note to art: “A broken mirror staring the world back in its face. Proving it to be chaos and cracked. And if I can’t be that then I do not want to reflect anything anymore”. Hannah Still’s little copper etching plate could have been made to illustrate Stones’ prose or vice versa: an oval mirror reflecting the corner of a room with a writing bureau and window, the plate’s mutedly reflective surface and the mirror’s graven image making a quiet challenge to notions of representation.

If that all sounds a bit sombre, it isn’t meant to be. These and other works were also infused with playful humour. In Simon Lee Dicker’s ‘And the sky fell in’, piles of ant powder were pocked with gold nuggets, that on closer inspection proved to be blinged-up dead woodlice and insects. For some reason they reminded me of Marc Quinn’s statue of Kate Moss. They marked the points of a sprawled, complex angular structure that that suggested the metal frames of schoolish furniture. Around the edges, like fallen-out panes, were Perspex shards, some printed with pointy imagery: a Kandinsky painting, modernist architecture; and text about a work about 9/11… The form and title suggested the edifice of reality crashing to the ground and splintering, revealing it to be like the giant dome that Jim Carrey occupied in ‘The Truman Show’.

Jethro Brice’s ‘Assembly of peripheral bodies’ could almost have been a similar structure post-falling-in, re-assembled as something new. What looked like a toy wheelchair and bits of ironing board were topped with a warped bicycle wheel, occupied by unpainted ‘model railway’ figures. They balanced round the rim, and hung from a gantry on their plastic connectors – off-the-peg people, woodlouse scale. A couple of casualties lay underneath on the floor. Their relatives looked happier squatting the remnants of a flooded urban landscape in ‘Artist’s impression of a coastal settlement in the early post-catalystic period’. Meticulously rendered cardboard ruins formed the backdrop of a strangely idyllic scene, moss seaweed lapping the wall of a turquoise harbour.

Another model figure cropped up in Sue Palmer’s ‘Difficult pony l’, contemplating its plastic horse which sprouted a too-large cylindrical protrusion centre-saddle; possibly the link that fixed it to the mould, possibly a device to enable the model rider to stay put – now, in the centre of the blown-up image, looking painful and rudely suggestive.

Below in the fireplace spilled Theo Wood’s yellow-faced polystyrene chunks, ‘untitled (printing blocks)’, in place of coals or wood. Megan Calver’s ‘impromptu ponds’, plants suspended in water-filled identikit white buckets, had spread outside the gallery space to form a trail across the village. Their serial roundness was echoed in her circle of gobstopper planets, ‘In winter look patiently around the edges of pools’, which hid quietly on the floor near to Lawson’s galaxy poster.

Hannah Still read her short essay ‘Between making and not-making’: the combined value of process and object being greater than the sum of its parts, the creative potential of the interstices between idea and realisation or finding and defining, and the artist’s need to constantly make and unmake. These notions sprung up everywhere in the show, from her own un-printed plate, to plays on readymade-ism and the transformation and misappropriation of found things. Formal and narrative connections criss crossed the room like a free-association game that covered fragmentation, life, death, disaster, hope, preciousness, the conveyance of meaning, geometry and the universe. (Everything, you could say, and more.) Stones’ letter ended with the thought that he might go and become a curator instead; one of the main things I took away from the show was a gentle indictment of the urge to fix work in a finished state. Overall, a compelling exploration of the ‘catalystic’ potential of the permanently in-progress.