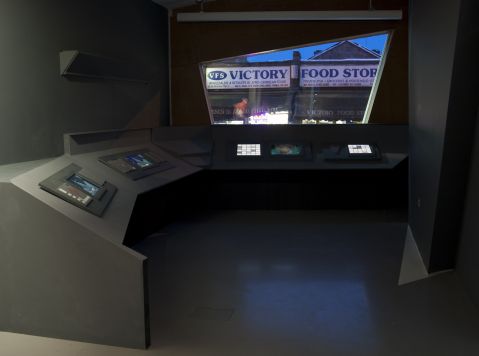 Mobile Suit Academy is an exhibition of new work by David Blandy at Peckham Space. The show is an immersive installation, created with Inko, a professional Manga artist and long-time collaborator, and students from the Harris Academy Peckham, a local secondary school and post-16 educational institution.

The gallery has been transformed into an imagined space shuttle flight deck. Two screens act as windows into space outside; to the left are passing asteroids, to the right is a nebula. The cockpit window directly before you looks out onto Peckham High Street. Two small screens embedded into the control panel display the filmed work, an animation presented as two transmissions collected on the shuttle’s journey through deep space. With Blandy and Inko, the students at Harris Academy designed their own mobile suits, an anime term for the robotic exoskeletons worn by characters in outer-space adventures. The film is comprised of two mobile suited characters reflecting on their sense of self, their sense of place and who they might be expected to be. Neither mobile suited character is gender specific and their words, which have been translated into Japanese, are subtitled in English.

I first saw David Blandy’s work in 2008, at the short-lived Artprojx Space in Knightsbridge. He had converted the gallery into a dojo, a workout room for rap battlers in training. I liked it because it seemed that we shared some of the same cultural references: comic books, anime, turntables and the Wu-Tang Clan. However I left the exhibition feeling that the work was a little empty, a little incomplete and a little obvious. Later that year I saw another set of Blandy’s works during the Liverpool Biennial, at The Bluecoat, that featured his alter ego, The Barefoot Lone Pilgrim, and a ‘newly-discovered’ American soul singer called Mingering Mike. I liked this much more. There was less of a sense of incompleteness. The personalities that Blandy creates and mythologises felt more coalesced in this display. If your art is based around identity, the ideal situation is the reduction — potentially, the entire erasure — of the distance between the self and your other.

A few years later I sat in David Blandy’s studio watching a cut of his latest film, Child of the Atom, in which he takes his infant daughter on a trip to Hiroshima. After the film had finished we chatted for another hour, mostly around the theme of identity, his development as an artist and the films Barefoot Gen and Grave of the Fireflies. I told him that, at university, I had wanted to be a video artist and had made three filmed self-portraits where I recorded myself recreating still images of Yasujiro Ozu, Randle McMurphy, and Alvy Singer.

I have a preoccupation with film — a love that began when I was a teenager. At university, away from home, away from friends and away from London for the first time there came the opportunity to explore my own personality and begin to nurture new identities that had hitherto been forced (by established subliminal structures) to lie latent. The camera, the performance, the costume and the history of cinema were the necessary conditions required for me to create a comfortable and habitable haven to explore these identities.

It struck me that Child of the Atom was the first David Blandy film I had seen where he explores his own identity by mediating between a variety of agents: his daughter as an infant in the present; his daughter, older now, narrating the film from the future; and through an admiration for Japanese culture, specifically in the examination of the national self-identity undertaken by the Japanese in the years subsequent to the dropping of the atomic bomb. Child of the Atom is definitely one of Blandy’s best films, though I did feel that there was still a sense of incompleteness to it. That might be purposeful; this is the key to all of David Blandy’s work. You cannot approach it and expect any kind of finality, because by definition there can be no resolution to psychoanalysis.

The first thing to notice about Mobile Suit Academy is that it retains the psychological aspects that are key to Blandy’s practice, except here this practice is externalised and projected onto a physical space. It’s a useful method of exploring emotional identity with young people while maintaining the focus on artistic creation over personal analysis. He says, “The idea of designing Mobile Suits is an attempt to take the young people out of their usual conception of themselves, to build something that represents their self-image through the distorting lens of Japanese Anime.” Just as Japanese national identity has had to undergo a rethinking and realise a forward-looking, more hopeful vision of life, the mobile suit is a science fiction remodelling of the samurai: a vision of strength in selfhood, a defender of honour. The creation of a space shuttle is an exaggerated structure, within which the process of self-perception is detached from the mundaneness of everyday life. It’s a structure that is necessary: an emotional and psychological sanctuary made manifest.

The work establishes a maturation in Blandy’s practice, fleshing out themes and lines of enquiry with a confident assuredness where previously these might have been tentatively approached. Working within the school and leading from experience, Blandy draws upon his wide and unique understanding of examining the multiple ways that personal identity can be examined, prodded, plucked at and drawn out.

I am a writer and editor from London. Â I am a research student in the Dept. of Critical Writing in Art & Design at the Royal College of Art, and work as Manager & Curator of tank.tv. www.ajayhothi.com