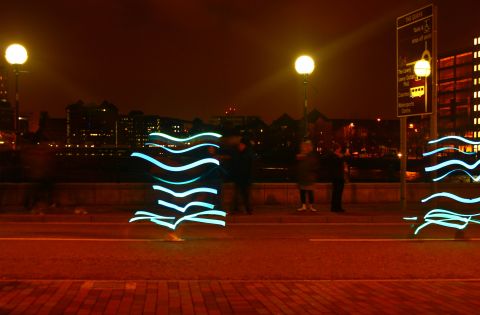 I emerge into MediaCityUK Square, a group of photographers have their cameras set up and all are pointing in my direction. I have made it, and go to take my place along side them. Seconds later, a line of people dressed in morph-like suits hooked up with bright blue LEDs on their arms and legs come jogging surprisingly quietly down the same walkway I have just come from. The line gets longer, until there are around 80+ light-morphs streaming past. It’s quiet; save their gentle rhythmic tread, and the long shutter speed snaps of all the cameras. It’s also incredibly cold, so cold that the simple act of setting up a camera and tripod is turned into a near-impossible challenge as my fingers freeze up.

The line continues on around the Quays, crossing the bridges and lighting up the architecture of the Lowry and Imperial War Museum North. Sometimes their lights change to pink to orange and back to blue, other times patterns emerge along the line. It’s a beautiful sight, but also unexpectedly humorous. The periods when the line stops and dips up and down over and over again, reminds me too much of the popular 90s computer game, Lemmings; the pixelated creatures trying to dig themselves down into the ground. Intentional or not, it makes me chuckle.

The grand finale takes place in the square. The lights of all the buildings nearby are turned off or dimmed. A surprising number of people have gathered in the biting winds whipping in from the watersides to see the spectacle. A pulsating drum-like sound is piped into the square as it is filled with the jogging beams of light. They fill the square, following along in lines, then criss-crossing each other, lights changing colour to the music, gaining in speed. Then they stop. Frozen for several seconds there is a visual poignancy to the whole event, it is a powerful piece of performance art. They begin darting around once more, this time huddling up into a group, their lights turning red, then bursting out at the crowd and back in again. These movements give the impression of a collective force of energy, enhanced by the persistent drumming sounds surrounding us all. It’s like watching a very modern tribal dance.

‘Speed of Light’ is an interesting piece; however, it is best watched from a distance to experience the lights as an abstract moving force, interacting with the surrounding architecture. It is also most impressive for photographers, like myself, who can create beautiful long exposure photographs that capture the movement and lines of light in a way the eye cannot see. The showing at Salford Quays sometimes comes too close and demystifies the magic of the effect that is created when viewed from afar.

Elisa Artesero is an artist and freelance writer based in Manchester