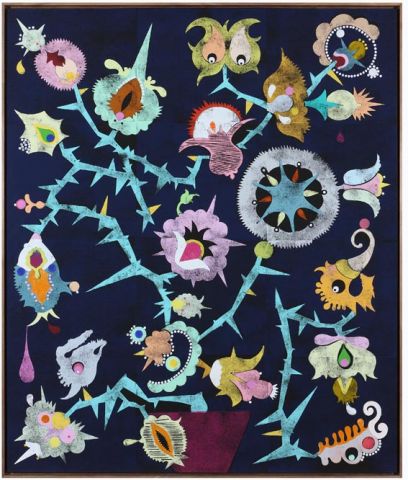 The woodcuts, collages and sculptures at the Whitechapel Gallery are a collaboration by the Romanian born twins Gert & Uwe Tobias.

The works are filled with familiar forms or patterns that sometimes resemble a living organism both in shape and appearance. These are then merged together with mechanical and decorative forms, figures, and sharp edged objects. The large canvases on display are made up of flat colour layered on dark backgrounds providing a striking contrast. Some parts of the works are meticulous in the way they are executed with patterned key strokes of a typewriter, grid-lines and repetitive mark making.

Those familiar the Brothers Grimm fairy tales will notice the reference to the traditional spinning wheel in “Untitled” (image 2) which is reminiscent of Rumpelstiltskin where a girl is locked away to spin straw into gold. This work draws the viewers attention to the detail in each of it’s sections and comes across as a compositional triumph. It teeters on the border of a childlike illustration and an adults dream-scape. The figure to the left has the head of an owl and a vase for a torso which leans on it’s side as if held in an intricate balance.

The use of the horizon line in the works give a sense of depth as though the objects inhabit a room or a landscape yet there is no illusion of perspective. It is a space where objects can take on a new identity in a magical or uncanny way. A realm where rules don’t matter as much as the exploration between the “real” world and that of the imagination.

The translation between the collages and the large canvases works well by retaining the the hard edge of the objects stuck on the surface. Elements within the woodcuts have this stuck on quality also as seen in the clearly defined edges which the woodcut technique provides. The sculptures add a further layer of understanding by resembling some of the ambiguous shapes seen in the 2D works.

I am aware that in some ways the artists are uncovering their own territory with the techniques they have applied in the works. By using the qualities of woodcut on such a large scale and often leaving out painterly brush marks in favour of blocks of flat colour they create an aesthetic which seems to be particular to them. Even so I was reminded of the hard-edged works of Josef Albers or Ad Reinhardt and the surreal collages of Remedios Varo or the otherworldliness of Leonora Carrington. The stage-like or performance-like quality to the works reminded me of the film Pans Labyrinth (Guillermo del Toro) which casts many curious and metamorphic characters. The combination of a hard-egded sensibility and Eastern European folklore together with an influence of communist era style makes the work stand out as existing in a world of its own.

The exhibition may attract visitors who are unfamiliar with the hierarchy that exists between the different art media. Those familiar with this hierarchy will be aware of the tendency to overlook certain forms of art for their decorative or crafted nature, however these works embrace this and make good use of techniques which work. By doing so they do more than prove a point or make a case for craft but encourage the artist and the viewer alike to explore the boundaries and bridge the gap between fine art and craft. It suggests that such hierarchies are outdated or even conservative.

An exhibition that definitely deserves a second visit.