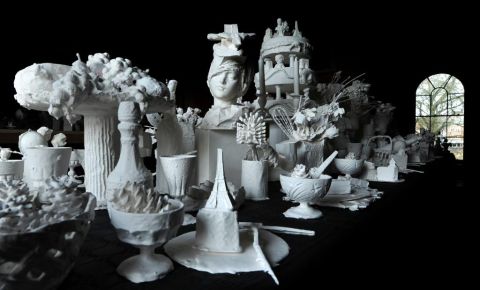 The pixie curators of Pitzhanger Manor have done it again. Last year’s mystical installation by Mutter Matter has been followed by yet another monochromatic feast for the faeries. Whereas the previous work captured the scene of a lavish meal in the making, this year’s installation presents a banquet in mid-flow, set within the classical reception rooms of Sir John Soane’s country hideaway.

John Soane is considered one of England’s finest architects. He purchased Pitzhanger Manor in Ealing in 1800, and subsequently stamped the building with his hallmark classical design features. It was his weekend retreat, a space to display his burgeoning collection of art, antiquities and other curiosities, as well as a place for entertaining friends and clients. Today, the manor is being restored to its 1804 appearance thanks to a generous HLF grant and a series of original etchings which show how it would have looked in Soane’s day: all vaulted ceilings, patterned cornices, ornamental niches and light-reflecting mirrors.

Visitors can walk through the ground floor historic interiors and be confronted by a series of tables groaning under the weight of an opulent dinner party. The surfaces are laden with bizarre-looking dishes vying for space among even stranger table decorations: platters of lobster and fruits de mer, baskets toppling with exotic fruit, mouth-watering cakes crowned with miniature figurines, vases of dried flowers mixed with kitchen utensils, boxes of petits fours and other tempting amuse-bouches. It can be difficult to tell which are intended for the gastronomic feast and which are meant purely for visual effect. But it doesn’t really matter because the spread is suffused with a ghostlike quality: everything has been created from brilliant white plaster, set against a jet black cloth. Even the plates, cutlery and trimmings are the hue of meringues, whipped cream and icing sugar, as if the chef might be some weird ‘Jack Frost/Heston Blumenthal’ hybrid, with the Snow Queen as guest of honour.

Tucked between the bowls and dishes are a series of head-and-shoulder busts, also created from unadulterated white plaster. This is the ‘secret society’ of chic and stylish characters. Their poses are classical, but their composition is surreal. Their faces are demure and doll-like, but their attire is moulded from the detritus of the modern world: things which are often used and soon discarded. What first appear to be symbols of wealth and status such as medallions, sashes, ruffs and epaulettes, on closer inspection turn out to be oversized Lego bricks, toy cars, jigsaw puzzle pieces, holiday souvenirs, plumbing, swimming goggles, crumpled cardboard, buttons and braids. But step back, and the whiteness dazzles and blurs to give an overall impression of luxury and affluence.

Kathy Dalwood, the designer of these pieces, claims that ‘low key is the new luxe’. In this age of austerity, she wants us to see beauty in the everyday objects she uses in her work, from tin cans and cigarette packets to plastic flowers and mass-produced picnic ware. She gives a nod to the world of contemporary fashion by referencing some of her favourite designers such as Dior, Alexander McQueen and Junya Watanabe, but always through the lens of commonplace materials to capture a particular look or profile. Self-taught in the craft of figurative sculpture, Dalwood uses moulding and dipping techniques to create her work. Plaster gives a fragile and delicate appearance to the busts, yet it is remarkably heavy and solid when handled.

Whereas the moulded busts have a crisp, clean outline, the banqueting paraphernalia consists of actual objects dipped in plaster. Drips and trickles form part of their syrupy texture, like vanilla ice-cream that has started to melt. Even the cutlery and wine glasses have a sticky, finger-licking appearance.

The stylish busts, adorned in fashionable millinery and refined garments, seem unsure whether to partake of such indulgence. This is like a modern-day version of Rossetti’s Goblin Market, where the sisters are torn between succumbing to, or resisting, worldly temptations. It takes an iron will to resist the Goblins’ siren call to gorge on such bounteous offerings. These busts, poised among crumpled beer cans and empty cigarette packets, keep their eyes modestly averted and lips firmly sealed. Although they are willing participants in this wild party, their message seems to be to look but not to touch. One suspects that Sir John and Mrs Soane, not to mention Kate Moss, would secretly approve.

Maria is co-founder of The Exhibitions Team, an association of cultural professionals specialising in the development and delivery of museum exhibitions.