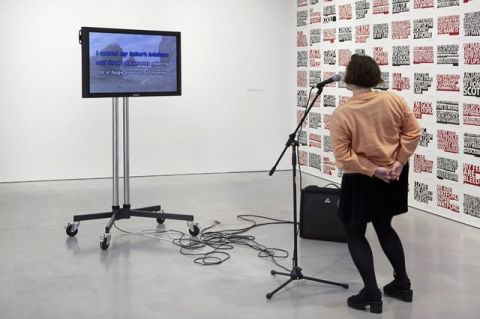 Carroll Fletcher is situated in Fitzrovia an area of Central London, which backs onto the immortal commerce of Oxford Street. Along Eastcastle Street it is not uncommon to witness slumped, exhausted teenagers propped up by pillows of plastic bags and locals frantically charging along, freed from languid shoppers lead by eyes rather than feet. Fitrovia’s defining characteristic is that it is rendered characterless by commerce. This sense of emptiness is reflected in the work London Wall W1W, 2013 of Thomson & Craighead’s show Never Odd or Even. On the right hand side of the upper gallery, the wall is gradually papered with Tweets gathered from within a one mile radius of the gallery for the duration of the show. The context of the Tweets have been changed into the format of flyposters and have a vaguely political aesthetic, in bold font and a red and black colour scheme. They read as a log of the consumerism and tourism of London. The wall is added to everyday and edited personally by Thomson & Craighead. Through stasis on paper, the Tweets are rendered banal somehow. The content generated by the radius of the gallery directs the viewer to consider a concept of digital litter. As a stranger, a slow disinterest becomes apparent when encountering the textual remains of yet another shopping trip or a coffee break. Through content generated by geographical location, Twitter itself is shaded as trite and shallow.

Detritus from the online world is also featured in the neighbouring work More Songs of Innocence and of Experience, 2012. The piece takes text from spam emails and transforms it into scrolling song lyrics on a karaoke style machine. The accompanying microphone facing the screen implies that the viewer should have an engagement with the rolling words or works as a device to reaffirm the new meaning of the spam texts. Thomson & Craighead gathered and preserved the spam emails over a number of years. Through the process of collecting, spam becomes a socio-political barometer of the world at the time. The lyrics appearing on the screen become laments which range from the subversive, pitiful, surreal and exploitative. Through the vessel of the song, the words underpin a narrative of geopolitical conflicts past and present and geographical wealth divisions.

Both sources of content, spam email and Twitter, are continual generators of data. The process of sifting through all of this information manually to create new meanings is very curious and presumably exceptionally laborious. This commitment to laborious production is shown in another work in the show: Time Machine in Alphabetical Order, 2010. Thomson & Craighead spent 6 months re-editing the film so that every word spoken is played in alphabetical order. The work definitely asks questions about how we manage and frame this expanse of information culturally, politically and eventually curatorially. The work asks question about our digital cultures but, it does not stray into questioning the use of digital tools to enable a curatorial or art practice manage this data. The constant cycling of the information is the first issue, in London Wall W1W and More Songs of Innocence and Experience, as the data becomes fixed in paper and in film and manipulated manually through the artists.

An observation could be that as an audience, our knowledge of access to data is already more sophisticated than what is displayed. In technologically advanced societies, we are accustomed to being able to access the information we want to gather. Our concepts of edited news information for example, has changed. Interference in the constant stream of information by way of traditional journalistic editing or by governments blocking sites through ISPs, can now be seen as a violation of human rights and experience. If anything, the work in Never Odd or Even asks questions about how artists manage these issues curatorially when dealing with digital material and content. Unwittingly, the show emphasises the chasm of knowledge between the art world and the digital world. Cycling through Twitter and spam emails for content is as much a programming problem as it is a curatorial one and needs to be acknowledged by the art world as such. This is actually not a criticism of the show but, a more general consideration of how artists engaging with digital materials often don’t use digital tools to manipulate them. This is the wider debate for me at least, that Never Odd or Even proposes.

The progress of London Wall W1W can be viewed here: tclondwall.tumblr.com