We Are All Alternative Structures - a-n The Artists Information Company 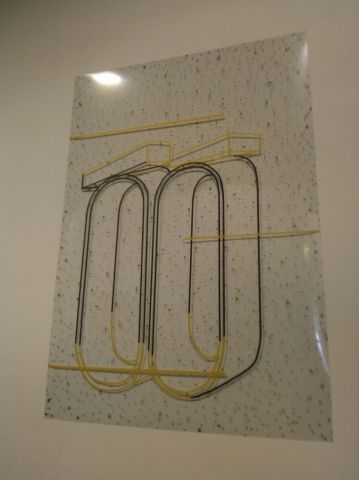 We All Alternative Structures is the newly opened group exhibition at TAP (Temporary Art Project) in Southend-on-Sea and brings together six artists; Greig Burgoyne, Anna Clawson & Nicole Ward, Jean-Philippe Dordolo, Ian Giles and Scott Massey. Selected from an open website call from TAP, the curator Borbála Soós was invited to make a selection from artist’s submissions of existing work. Soós is interested in the idea and theories of rhizomes, hierarchies and structures and after initial conversations with the artists, each decided to produce entirely new work for the exhibition over a relatively short time period. This pace of production gives the resulting mixture of wall based work, installation, video and sculpture a certain immediacy and energy that is sometimes lacking in these open call submission-based group shows.

TAP, a former waterworks and, more recently, office space is laid out with a wide central hall-like area and several medium to large side spaces and generally the works in We Are All Alternative Structures are curated away from each other and occupy clear territories. The hall area plays host to Jean-Philippe Dordolo’s Stilleben consisting of an orange clay and expander foam Squirrel sitting on a grey plinth apparently looking at two large sheets of plywood. Mirroring in size the panels that make up TAP’s current flooring, holes are punched through the wood and white-coloured walnuts are wedged into these gaps. It is unclear as to whether the Squirrel is sitting back looking at his own creative handiwork or contemplating and considering a joke that has been played on him and his food stash. Next to the exhibition guides that are placed near TAP’s entrance you can find a further extension to this work, a map showing the Squirrel at the top and a circular labyrinth puzzle that will take the little guy to a cluster of walnuts. It took a nudge and a point in the right direction from curator Soós ( I don’t think I would have realized there was an outdoor element to Dordolo’s work otherwise) to find a small cluster of white walnuts fixed to a pile of rubble and dirt in TAP’s front car park area.

In the same central corridor space to Dorcolo’s work can be found two prints by duo Anna Clawson and Nicole Ward. Working on different schedules, the two artists rarely work simultaneously in the studio together with one coming to the studio and often expanding or deconstructing what the other has left behind. In the two works shown, both titled No Need to Make a Pitch, the outline of undetermined industrial mechanisms in black and yellow are printed on PET film which appears flecked and a bit pop, ever so slightly like the industrial version of leopard print. This work is interesting but, to me, displays potential rather than dynamic resolution. The artist’s working production process results into a curious authorlessness in Clawson and Ward’s work – a clash of Bruce McLean aesthetics, a Caro commitment to materials and a smattering of the almost industrial fetish programme, Discovery Channel’s ‘How It’s Made’. The two need to find a more clearly defined voice without losing the certain sense of successful unease that is emitted through the work by the partnership – as if the work has been struggled and labored into existence, every wobble or disjuncture in the printed lines crackles with an energy or fizz of electricity.

The logical first and last rooms/spaces in the exhibition are occupied by film and video works. The first, World of Warcraft/Jumping from Scott Massey shows a character from the multiplayer role playing game simply jumping on the spot for 17minutes, 51 seconds. Around the character the action continues as other players continue their game, probably interpreting this specific characters repetitive activity as an inability to master the controls of WoW. Animals, heroes, monsters continue to run about in mad battles, sometimes running into Massey’s pogoing character. The result is a clever and funny Vito Acconci style performance made even more of a delight due to the non-existence of contemporary art within World of Warcraft (as opposed to a game like Second Life) but its absolute dependence of repetitive actions, hierarchies, realms of reality and power structures.

Another work that deals directly with repetition is Greig Burgoyne’s Gapfillers. Two large sheets of white paper hang from the ceiling, each marked with small lines running down their surfaces in the colors of dryboard markers. The marks are made by placing post-it notes close together and filling in the gaps with colour and forms a Slinky like or sand art pattern, transforming the marks into a portrait of some kind of executive toy. On one side the pattern moves upwards and the other downwards in perpetual motion whilst still, through its hand-drawn marks, retaining a crafty style rough and ready Tinguely kineticism.

Ian Giles’ video in the furthermost space in TAP has been conceived of as more of an installation. The screen is hung in the centre of the room held by a wooden double beamed structure that echoes the industrial shapes of Clawson and Ward’s print in the space before. In Praise of Shadows (running at 6’21”) films alternative health practices such as clay meditation and nude yoga. The shots are set up as contemplative formal portraits and the people shown, very much ‘in the zone’ of their self restorative or healing actions often appear to have much less dynamism or movement than the inanimate objects, for example the ceramic bowls. It was from Giles’ 2012 performance installation at Tate Britain that the title of the TAP exhibition comes, people were invited to work with, meditate with and use large sticks as extensions of their bodies in a work called We are Temporary Structures.

Overall We Are All Alternative Structures is a strong one and a demonstration of how a quick curation process along with the rapid and enthusiastic response of a small group of artists on a limited budget can result in varied and progressive work. Less interesting is the curatorial text which frames the exhibition in terms of a Deleuzian rhizome structure and is vaguer about the processes and narratives of the actual work on display. Of course, with artists producing new work right up until the exhibition moment and boring realities such as print deadlines, exhibition texts can often talk only about the process and not the result. The event on the 20th July, where the artists and curator will be in conversation and discussion with George Vasey will be well worth the trip to the seaside.