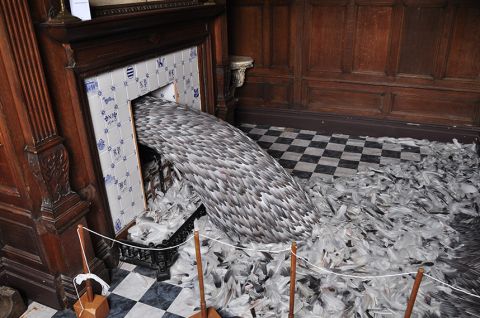 As a bit of background, the Open West is an open submissions exhibition curated by Sarah Goodwin and Lyn Cluer Coleman now in its fifth year and has evolved in this short space of time to be hosted in a number of different locations in the region which gives each exhibition a unique and refreshing set of curatorial challenges. This way of presenting in an immersive atmospheric environment has seen a number of examples in recent years ranging from the excellent Picture House (2007) in Belsay Hall, Northumberland to The Temple of a Thousand Bells (2012) located in York St Mary’s church.

The first work encountered on entering Newark Park house is Kate MccGwire’s Heave which feels like a frozen Hollywood special effect. The pigeon feathers spill vortex like from the fireplace, splashing into a liquid like pool or alternatively resemble a creature scurrying into the fireplace as it tries to escape the viewer’s gaze. It’s an impressive introduction but what do the numbers stamped on the feathers mean? Perhaps they symbolically inform the viewer visually that each bird’s number is finally up in a manner reminiscent of vanitas. Which leads smoothly to Liz Morison’s Porcelain Fruit which continues this symbolism of life emanating from death. In this work, life appears remarkably as something surpressed and rebirthed at the same time. There is a pleasing sense of fragility here as a sense of slow, almost time lapsing decay brings to mind Sam Taylor Wood’s Before and After. In another room, Caroline Tattersall’s interlocking construction cast from original keys belonging to the house and Sara Wicks miniature house construction also appear as if existing from another time and place, perhaps in no small part due to the simple whites, earths and ochres colour schemes to many of the works on this floor.

In one of the most interestingly curated rooms in the house resides Pieces of Kennet by Jo Davies. A series of smoothly rendered horn-like ceramics are arranged in a circular fashion atop a dinner table, appearing as dangerous as a set of shark’s teeth. Are they a victorian utensil, used for spearing fruit perhaps or something more sinister? This encouragement to the curious is one of the many strengths of the exhibition and as the viewer continues through the house there is a feeling of being involved in a real life game replete with numerous tangential side quests aiding the interpretation of the many objects on offer. Those familiar with this genre will no doubt be thinking of Myst, Silent Hill or Resident Evil. Thankfully there are no zombies in this show, but interpretational clues are given in the form of the (Richard Wright like) gold floral ceiling and the textiles catalogue placed on one of the dining chairs. From the revelation that the 1883 print is the only example of a William Morris print made into a woven textile the viewer then realises that the room is then in effect a series of mirrors and reflections. Daniel Richardson’s Demons (are forever) contains mirrored writing within its colourful japanese aesthetic which bridges Paula MacArthur’s equally colourful gemstone paintings on the opposing side of the wall. These visual hooks encourage the viewer to seek out personal relationships between the works on offer and the surroundings. Other memorable work on this floor include Vaughn Horsman’s unusual star chart like constructions which flank another MccGwire work that appears as if it is an infinity symbol. The placement of these works complements the expanse of the garden vistas viewable through a provided pair of binoculars. I only wish at this point that the exhibition was viewable with the night stars visible on a clear night.

Moving upstairs, perhaps the most memorable work is by Akinori Ueno Miki, a charming piece of equal parts moving image, painting and shadow play. Lotus flowers unfold and meld into abstraction as the story unfolds. Despite at times lapsing into a kitschy over-sentimentality due mainly to the piano soundtrack, it manages on the whole to stay artistically engaging till the end due to the humour present in the shadow play. On the other end of the spectrum, William Lindley’s intimate architectural compositions are presented unusally in a series of constructions ranging from open stepped drawers to an improvised slideshow projection onto a ‘window pane’ inside the house. His work is currently also showing in open submissions competition MK Calling at MK Gallery. Other interesting artists to look out for in the vicinity are Judith Hammond’s fragile dresses made from plastic carrier bag lace and Sara Wicks arrangement on the bed.

Finally, the basement offers a number of installations ranging from the simple UV lit ready-made courtesy of Beatrice Haines which showcases a beauty created from the most humble or common of discarded materials. It is also where the two channel video piece by Azadeh Tajpour depicting a protest in Iran in differing Uta Barth like resolutions is located. In the juddery videos, Tajpour appears to be questioning the viewer’s understanding of an obfuscated reality as they ‘tween’ the keyframes presented.

In conclusion it seemed overall that most artists had their rightful place in a generally cohesive curatorial vision. Some points of contention include the under utilisation of the beautiful landscaped gardens, and the rather surprising difficulty of ascertaining which interventions were by which artists at some points. In addition it was felt that the basement was not really adequately signposted and somehow felt a little detached in constrast to the rest of the house. Of course slight discrepancies are probably inevitable with the sheer number and diversity of the works on offer here. On a positive note it should be stated that the enthusiastic and knowledgable volunteer guides contributed greatly to the experience.

The open submissions process is not a perfect one and with an increasing number of new competitions being presented yearly it can be a gamble financially for artists paying on average £25 per entry with no guarantee of success. Even if selected they may still end up being part of a disparate and disorganised show. In the case of the Open West, the lottery does provide those that make the final shortlist inclusion into a professionally curated show, with accompanying documentation, a chance to participate in workshops, residencies and talks as well as the chance of being presented in glorious surroundings (and tour to another venue) which would almost be impossible without this financial support structure. In that sense it compares favourably with well established open shows such as the Jerwood Drawing Prize for instance. The Open West‘s main strength is that the curators have been ambitious in integrating the artworks intelligently and sympathetically within (and around) the house and have given each discrete area a particular flavour through the inclusion of new site specific works. It is clear that the curators have been open enough in allowing visitors to deduce meaning from what would otherwise have been just a random assortment of disparate artistic objects. It will be interesting to see how this show translates to the next venue with somewhat less atmospheric surroundings. In the end, this show is about more than just the individual pieces and encourages an extra layer of engagment via the history of the location and when done in a guided manner such as this enables both work and location to ring harmonically.