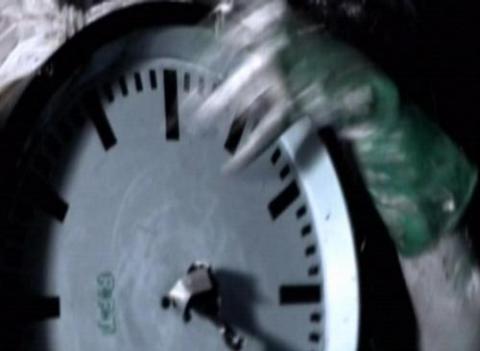 What exactly is video art? What's the difference between a video-art festival and a film festival? What's the function of video within the "art" world? Is video an art form or a tool to create art regardless of issues of "art form?"

These were the kind of questions being asked argues and debated in conference rooms and open air bars for over a week in the Mediterranean city of Valencia, as a host of Spanish and international video artists and curators arrived for the Vidifestival, organised by independent art centre La Sala Naranja.

La Sala Naranja is an art space and organisation in Valencia which is dedicated to promoting diverse and experimental initiatives, and to organizing independent new platforms and distribution channels. The organisation launched the Vidifestival to give a platform to video art not only as a showcase of works, but as a centre of debate and information-sharing about video in its widest artistic sense.

The festival was held in different spaces around the city, including an open air street projection event. The programme consisted of video shows from artist run organisations such as Luna Nera (UK), Anonimo Colectivo (Mexico), Kings Artist Run Initiative (Australia), Namastic (Finland) and VCTokyo – to name a few – and "official" organisations such as NCCA Moscow, Pace Digital Gallery (NYC), Clac (Palermo), and many others. This mix of curatorial styles and attitudes created a sharp and engaging festival with genuinely engaging work.

With no "big names" featured in the festival, it was an overview of what artists are actually doing, and all of the work had to stand on its own. The accompanying conferences were also important in allowing discussion of the range of "video art", as groups were able to discuss their work in, for example, subverting political images, addressing media culture, activating public spaces and questioning the concept of "art form."

Seeing how the different practices and different groups related to each other made me understand that we had everything in common, that there is a strong shared vision between "video artists". Collectively we are interested in questions about audience, about media culture, about technology. We are consciously working in a medium that is not a closed system, but is used for many non-art purposes. Our work can be art and not-art at the same time, it can have function and non-function simultaneously.

At the same time, we began to discuss the role of the curator, and the realisation that – with a few notable exceptions – video art is rarely well curated within the art world (as opposed to film-festivals). We also cannot deny the fact that we artists often just don't demand enough in terms of how our work is shown.

Attending the conference as a participant and spectator gave me the opportunity to examine my own practice. Meeting the dedicated and knowledgeable video curators that presented at the Vidifestival gave me hope.

GILLIAN MCIVER IS AN ARTIST AND CURATOR