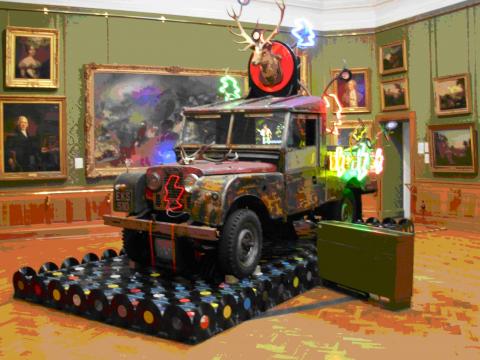 A question of Scottish identity: Does one embrace the idyllic vision of a barren Scotland of rolling hills, epic lochs devoid of humanity except for, perhaps, a wee castle nestling in the landscape? Does one accept the reality of sprawling cities, an increasingly cosmopolitan society and a move away from highland tradition? Or, in what seems to be the majority of cases, does the Scot welcome the romantic stereotypes of their nation realising that this is what people want to believe in and hope to witness?

These issues and many more are raised in Ross Sinclair's sculpture on display in Aberdeen Art Gallery until the 9th of April 2007. The decision by Curator Craig Richardson to place the old Land Rover, which is covered in overtly tacky neon Scottish maps, stag antlers, tartan and vinyl's of Scottish folk music, in the room dedicated to traditional Scottish painting in Aberdeen Art Gallery is a stroke of genius. Its placement here calls in to question how Scottish identity has been conventionally portrayed by the likes of Sir Edwin Landseer and shows Sinclair's work as a direct challenge to this. Whether or not one wants to accept Sinclair's objection to the visions of a rustic and unspoiled highland Scotland, it is clear that the artist (with some help from the curator) has highlighted a certain patronisation found in the traditional works.

I have just graduated from Aberdeen University with an upper second class MA (Hons) in Art History.

I graduated in Art History from Aberdeen University in 2006. I am currently based in Aberdeen but will be moving to Glasgow in a few short months where I hope to continue writing and reviewing art. If there is an exhibition opening offering wine - I am sure to be there!