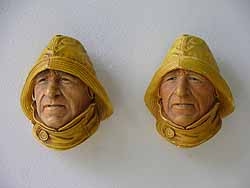 RSVP displays work by fifteen artists from the East of England, inspired by the art and social history collections at the Foundling. Curator Gill Hedley invites visitors to ‘find new ways of looking at what is around them’.

The show at times struggles to live up to this bold precursory statement. Visitors have to negotiate between a sizeable collection of pieces, with much of RSVP mixed up with the Foundling’s permanent collection. Work becomes hidden in the nooks and crannies of the building and you have to unravel the show from the inside out. However, despite this testing approach it is ultimately rewarding.

Alex Pearl’s ‘Portrait’ is cleverly placed in between eighteenth century oil portraits, his lenticular photograph intelligently playing with pre-conceptions of such a traditional space as the Foundling. There is some great work here, including Tom Cox-Bisham’s ‘Cake Ruins’ and Nicola Naismith’s ’33 Stitches Per Minute’, an exploration of the Founding Hospital’s vision of turning children into useful citizens through preparation for work.

It is the more obtrusive works that fall short of the overall concept. A room full of David Kefford’s pencil and ink images may work in isolation but why include a single Kefford close to Pearl’s ‘Portrait’ on the stairwell? Also, Emily Russell and Kristian De La Riva’s print doesn’t really ask much of the grandfather clock next to it on the ground floor. Matt Cook explores this territory much more successfully with his mixed media installation.