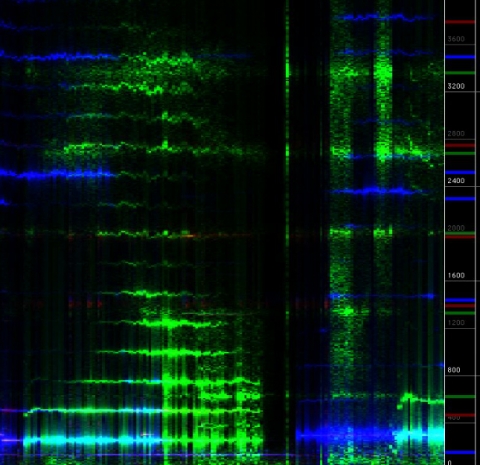 HEARIMPROV was the first public performance by a musical ensemble formed by artist Adinda van ’t Klooster. Nine musicians, drawn from a variety of backgrounds and including van ‘t Klooster herself, improvised to a series of visual scores, created for this project. The visual score, a format developed by avant-garde composers of the Twentieth Century, inspires free musical interpretation, unlike the precise, standardised notation of a conventional score. Those used for HEARIMPROV were digital animations, each in turn projected onto the wall behind the performers as they played.

Projected alongside each score was a spectrogram, a device used in the treatment of hearing-impaired patients by allowing them to visualise those frequencies of sound which they cannot hear. It displayed the sounds made by the players as coloured bands, looking somewhat like paint dragged by a squeegee, and was manipulated by an interface which members of the audience were invited to try out after the concert. One of the aims of HEARIMPROV was to explore the application of this technology in making sound art accessible to people with hearing difficulties, with a hearing loop and signer also provided for the performance.

The character of the first piece matched the liveliness and layered textures of Julie Freeman’s score, with a nervous, busy sound relieved by smoother interpretations of slowly moving squares and circles. The second piece, to van ‘t Klooster’s own score, began with a similarly brittle texture, to images of falling droplets. The necessary variation in visual and musical mood came with an eerily beautiful section in which a male and a female vocalist improvised over a minimal accompaniment, thereby producing the most startling change in the spectrogram which showed only blue and green.

It was during this 30-minute piece that it became clear that a number of rules must have been established during rehearsals to bring about these changes of mood. Sections where musicians were at rest, used their instruments in unorthodox ways, or played one off against another, did much to make the performance worth listening to and not subsidiary to the visuals.

By the fourth piece, it had become clear that the most engaging were the improvisations to scores whose linear format most resembled standard notation. Those by Steve Brown and Dominic Smith, while visually distinctive and highly inventive, were interpreted more as an overall mood than presenting a sequence of musical ideas. During passages where the scores were hardest to interpret, or where the image was generalised, the performers appeared to revert to established musical idioms (whether from jazz or contemporary classical music), or to impose their own structures (such as the repeated two-note motif that opened Smith’s ‘Happy-NES’. Altogether, these improvisations raised important questions about the roles of freedom and order within the arts, as well as the pros and cons of collaboration.

For van ‘t Klooster’s next project, versions of her visual score recorded by different groups of musicians will be relayed simultaneously through headphones, a development that will allow audiences to understand much more about the nature of this interesting cross-disciplinary practice.

Steve Wright is a contemporary painter currently based in Watford, Hertfordshire.