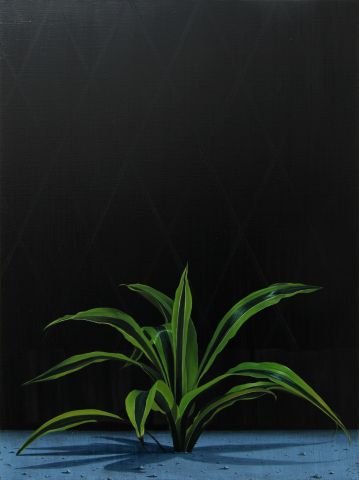 Transition Gallery has curated its current show Wintergarden at Sutton House, a marvellous restored Tudor house in Hackney. The venue is yards from the site of Loddiges nursery which, although nothing now remains, housed the largest hothouse of palms and orchids in Europe during the nineteenth century.

Part of the exhibition included a very interesting walk and talk around the 16 acre perimeter of the nursery by artist Bridget Ashton. The tour group was reliably informed that between, 1785-1852 George Loddiges, son of a Dutch émigré built the nursery from a humble seed business into a world renowned garden centre that cultivated many of the rare and exotic plants grown in our gardens today.

I was struggling to understand what I was doing trekking around Hackney on a very grey, damp autumn day, imagining what the garden centre must have looked like, when it occurred to me that that is what artists do. Artists are dreamers after all. Imagining things that aren’t there is our stock in trade. It is also part of Ashton’s clever working strategy to engage her audience so directly in place and narrative as part of her art practice.

I then wanted to know what drove the impulse to sell a small piece of Eden to, what would have been the middle classes; to take home and plant in their newly acquired gardens and decorate their interiors. But then that is what this exhibition is doing of course, critically activating the ideological motivations that underpin such a venture.

The nineteenth century was a philanthropic age rife with Christian socialist activism but it was also a scientific age and the industrial revolution meant the rise of the middle classes. The nursery was a commercial venture selling the idea of internationalism. Plants from Asia, the tropics and Australia could be imported with the invention of the Wardian case. It was not a universalism that was being sold however, but an individualism more in line with the sole collector and his single specimen.

The Victorians loved decoration. It became a sign of their bourgeois aspirations. For an interesting take on the garden ornament INTERNATIONAL LAWNS’, Joppatowne Snowmobile is an oblique exploration of how utopian ideals are often built on shaky foundations and where they can end up. Their photographs of light, moderate to heavy snowmobile and text justifying why it should be used as an ornament are a witty reminder.

The Victorians loved artifice. They made wax flowers, stuffed dead animals, collected butterflies; catalogued and categorised everything in sight, and were masters of the universe. What they were also masters of was glass, and what they were really obsessed about was scale. New technologies such as the microscopic lens and glass hothouse meant that they could study and create micro environments that could be manipulated and controlled. Alison Stolwood’s work is interesting in this respect. She has created a mini ecosystem by growing wildlife attracting plants from seed and raised Fritillary butterflies from pupa. Her photomontage ‘captures’ the butterflies in their artificial environment.

Annabel Dover’s work references the Victorian craft aesthetic with her paper cut hothouse flowers on hand mirrors, under cocktail glasses in Lux and under glass cloche in Holy Mountain, and I simply love her porcelain Inkcaps and Angel’s Bonnets. Jackie Chettur’s wax flowers, also points to the strange preoccupation the Victorians had with all things artificial.

Painting of course always has to confront the fact of its artificiality and there is some good painting here. Darius Lambert’s Isthmus and Caesura looks at the common house plant, taking it outside both its exotic natural environment and the greenhouse, it is dislocated and marooned in a nether land inside the painted surface.

One thing I did miss in the show was any work on hybridisation, but I liked the discovery aspect. Finding the artwork amongst the historical artefacts was a challenge and rather than a treasure hunt, the object of the exercise is inverted. This was epitomised by Cathy Lomax’s Outside, a small digital video work situated on a shelf in the damp cellar amongst the old bricks of the Tudor house. It didn’t just bring the Winter garden inside but really brought home a sense of verticality between the historical past and now. 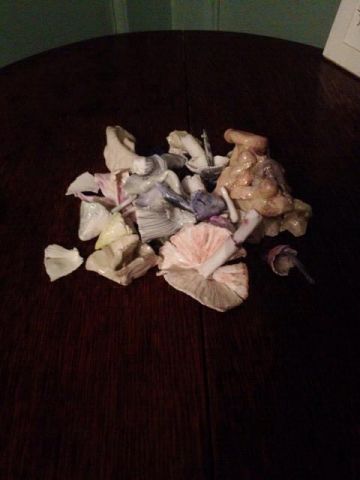