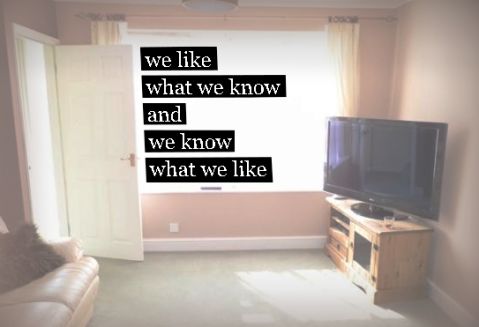 ‘We like what we know and we know what we like’ is the title of a new public art experiment by artists Trish and Dan Scott, happening in Swale. The project will work with Swale residents who have little or no previous experience of contemporary art, asking them to co-commission a new work for their own home to be made by artists they themselves have selected from an open call. The new work will made through a process of negotiation and exchange and will be the product of creative debate in which both parties have equal involvement. This is not a contemporary form of cultural imperialism, but rather an experiment into how audiences understand artists and vice versa. As Trish put it “This isn’t about imposing art on people, it’s about exploring the assumptions artists and audiences have about each other.’

Unpicking the boundaries of contemporary art is a well-trodden path, but many artists who attempt to do this end up working with an already indoctrinated contemporary art audience within carefully controlled contexts. As Grayson Perry put forward in his first lecture ‘Democracy Has Bad Taste’, art goes through a process of validation in which curators, critics, collectors and dealers are the accepted ‘gatekeepers’ of taste. Trish and Dan Scott’s experiment will be operating outside of this system, the individual participants will talk directly to their chosen artists, the recorded dialogue will form part of the work, and the commissioned artworks will be given to those who take part.

Contemporary art has become part of mainstream culture. As with all forms of culture, not everyone wants to like it and indeed why should they (we)? There are far more entertaining and important things out there than going to see art, and with contemporary art there is a high risk factor that it might not be good or, quite frankly, might be boring. However rejecting an artwork on the basis of not liking it is usually scorned at unless one has the art speak to back it up. Hence the existence of the art elite, the guardians of the hard-earned knowledge, and those responsible for defining what is good or bad art.

Perhaps handing the controls to the non-elite is an experiment worth pursuing, if appreciating art is subjective and open-to-all, then their opinions may reveal something more interesting than the guardian critic’s. One such critic, Jonathon Jones, wrote a short piece suggesting that democracy and cultural excellence were linked.

‘..the highest ideals of excellence in literature and art we uphold today were born in a democratic city, not a totalitarian one’

Jonathon Jones ‘The best art is born from Democracy’ Guardian 2010

Jones argues that democracy created the right conditions for culture to thrive. Using democratic methods to dictate how an artwork appears is what in the mid 1990’s Russian-born conceptual artists Komar and Melamid did in a project called ‘The Peoples’ Choice’ which used a voting system to determine the art. The project took place in 11 countries—including the United States, Russia, China, France, and Kenya, and used commercial polling services to determine what the general public thought was the ideal painting. Questions concerning colour, composition, and subject matter produced a series of statistical result which then lead the artists to create the ‘most wanted’ painting and the ‘most unwanted’ painting. The results were predictably conventional, with the favourite artwork being a traditional chocolate box painting, revealing as much about the process as the choices people made.

‘We like what we know and we know what we like’ takes these ideas to level of the individual and will investigate how putting artists and audiences together – in a direct and personal way – will affect the choices and decisions that the artists make. Will they work differently if they’re trying to meet and satisfy the expectations of a particular individual/household, as opposed to just making a work to be installed in an anonymous space? What effect will the social ties that people form with participants have on the process/outcome? Will the artist still make work they feel is engaging to a wider contemporary art audience?

The genre of participation in contemporary art practise is an ever expanding popular field. The words ‘engagement’ and ‘participation’ are thrown about and repeatedly used to justify the community benefits of the activities, yet defining these terms and to what degree an individual project embodies these qualities is commonly extremely vague. Participants are often referred to on mass in evaluations, or in segmented groupings such as ‘Dinner and Show’ (see http://www.artscouncil.org.uk/what-we-do/research-and-data/arts-audiences/arts-based-segmentation-research/13-segments/) for practical reasons, but they are as unique as the artists who work with them.

Dan and Trish Scott’s experiment is one of a number of projects funded by ‘Ideas Test’ is the Swale and Medway action research project (one of the ‘Creative People and Places’ Arts Council England projects) which aims to target specific local communities where there is below average record of ACE spending and low arts engagement figures. Questioning of how can artists produce work that encourages dialogue and engagement with audiences without compromising the ambitions of the artwork is an important part of this project.

The pressures of justifying to funders and gaining good press coverage often lead many arts organisations into a battle of maximising audience figures and capturing positive feedback, rather than investigating whether the process has worked. Over the next two years ‘Ideas Test’ will be funding a multitude of innovative research projects such as this one, hoping to learn more about what makes people take part.

To find out how to apply to be one of the artists in ‘We like what we know and we know what we like’ go to http://weknowwhatwelike.tumblr.com/

To discover more about ‘Ideas Test’ fund go to www.creativepeopleplace.info.